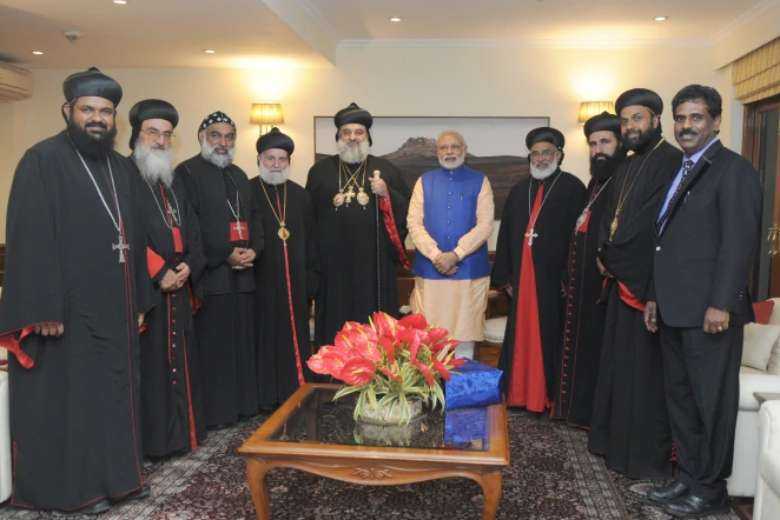 Indian Prime Minister Narendra Modi has intervened to settle a century-old dispute between two Christian factions in Kerala in a seemingly political move to woo voters before elections in the southern state this year.

Modi separately met top leaders of the Orthodox and Jacobite factions of the Kerala-based Malankara Church on Dec. 28 and 29 in his office in New Delhi as part of an initiative to bring peace among them.

Factionalism in the indigenous Malankara Church, a branch of the Syrian Orthodox Church of Antioch, worsened after India's Supreme Court in 2017 ordered the Jacobite faction to hand over more than 1,100 churches in its possession to the Orthodox faction.

Massive resistance and violence followed when the state government took steps to implement the order. Both took an adamant stance, with Orthodox members wanting the government to help them establish their legal rights. The Jacobites said they were the majority and would not part with their heritage and patrimony.

In an hour-long meeting on Dec. 28, "our leaders appraised the prime minister of the current situation, especially after the top court order, and want the government to ensure that everyone respects the court order," Father Johns Abraham Kanat, spokesperson of the Orthodox Church, told UCA News on Jan. 2.

"We are not demanding anything new. But we want the government to implement the court order, and no one will be chased out from our churches as is being made out," Father Kanat added.

He said other Christians could continue to worship in the churches and there "will be no restrictions whatsoever."

The Jacobite faction on Dec. 29 told Modi that the court order had deprived them of their churches and failed to do justice to them. They also sought the possibility of framing a law to overrule the top court order.

"We have also suggested deciding the ownership of each church based on a plebiscite rather than merely following the top court order," a Jacobite leader who met the prime minister told media.

Modi has authorized two Kerala-based leaders of his pro-Hindu Bharatiya Janata Party (BJP) "to continue with the dialogue," seeking ways to end the stalemate, said the Jacobite leader.

Both sides expressed the hope that the prime minister's initiative will end the century-old dispute.

Some observers admit in private that the Modi initiative has a political connotation in Kerala, where the BJP is struggling for an electoral foothold in the communist bastion.

The BJP currently has only one seat in the 140-seat state legislature, while the communist alliance has 91 seats and the rival Congress-led alliance 47 seats.

"The BJP is trying all its cards to widen its vote base. It will use the dispute as a stepping stone to winning the Christian votes. The communists are also trying not to offend any faction," said a church leader who refused to be named.

Vijayan's initiative came after Kerala High Court threatened to initiate contempt proceedings against top state government officials for their failure to implement the top court's order following a complaint from the Orthodox faction.

Under pressure from the court, the government took over 50 churches from the Jacobites' possession and handed them over to the Orthodox side amid violent protests.

The factionalism started in 1911 when Kerala's Syrian Orthodox Christians split into Orthodox and Jacobite groups.

The dispute continues over vast landed properties and churches they jointly owned before the split. The Orthodox faction has its supreme head based in Kerala, while Jacobites owe allegiance to Antioch's Patriarch.

The Supreme Court's 2017 order came after years of legal wrangling. The order cannot be appealed as it was delivered as the final judgment, consolidating all the cases on the dispute pending in other Indian courts.