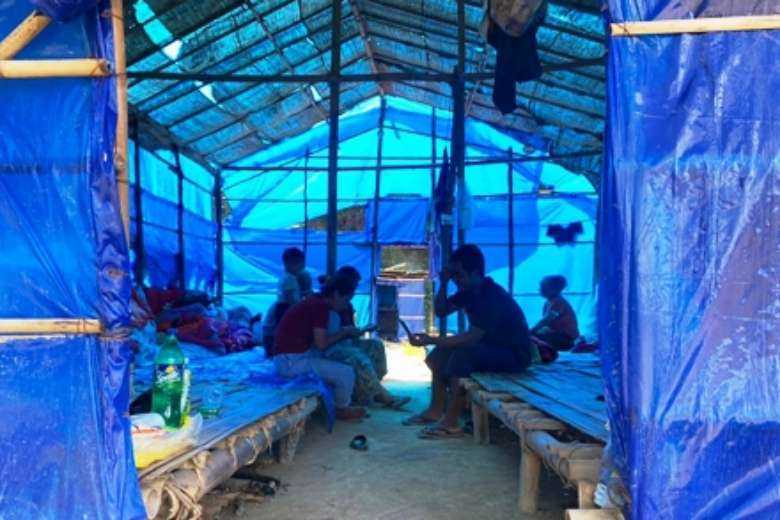 Refugees who fled Myanmar rest in a basic shelter at Farkawn quarantine camp in India's eastern state of Mizoram near the Myanmar border on Sept. 23, 2021. (Photo:AFP)

Christian parishes in the northeastern state of Mizoram are refusing to issue baptism certificates to refugee babies from Myanmar, saying they do not have any legal rights in India.

Mizoram shares an ethnic brotherhood and a border with Myanmar and has welcomed thousands of refugees fleeing the military coup in the conflict-torn nation.

But Christian churches of various denominations at a Feb. 1 meeting of civil society and political party representatives in the state’s Lunglei district decided against issuing certificates for babies of Myanmar refugees living in the district.

“Only government authorities can decide about the citizenship of such children. Baptism certificates could be later used to seek recognition as Indian citizens. There may be legal complications,” Pu Lal Kima, a native Mizo social worker, told UCA News.

About 1,100 people from Myanmar are residing in camps across Lunglei district. The Young Mizo Association (YMA), the state’s largest and most influential civil society organization, supplies rations and other essentials to these camps.

A representative of the Presbyterian Church of Mizoram Synod regretted the church's "inability" to issue baptism certificates for the babies of Myanmar refugees born in the state. The local Mizos are dejected as, according to them, the government and administration are not doing enough to help the refugees.

For all practical purposes, the children and their parents will be treated as Christians. But we cannot issue any document

"We have all our sympathies but we cannot give any paper that could attract actions under citizenship rules without prior and proper approval from the government authorities," a church leader said on condition of anonymity.

A Baptist Church leader said the lack of records would not affect Myanmar refugees' faith practices.

“For all practical purposes, the children and their parents will be treated as Christians. But we cannot issue any document,” he said.

An estimated 20,000 Myanmar people have fled to Mizoram since violence broke out in the Southeast Asian nation after the military coup on Feb. 1, 2021.

Most refugees are from Chin state and are Christians, just as people in Mizoram are. Their children go to school as last year state authorities made arrangements for their education.

However, they have no legal status as the Indian federal government has not recognized them as refugees to avoid displeasing the military junta in Myanmar, said observers.

The Indian government needs the cooperation of Myanmar rulers to deal with the insurgent groups from various northeastern tribal groups who take shelter and operate from the jungles of western Myanmar.

At least 170 churches are reported to have been destroyed in Myanmar’s Chin and Kachin states while Chin Christians were being forced to construct Buddhist pagodas in their place, their leaders alleged.

The Protection of Race and Religion Laws enforced in Myanmar some years ago restrict religious conversion and interfaith marriage.