Sister Jophy Joseph, who won the right to kill destructive wild boars, in her convent farm in the southern Indian state of Kerala. (Photo: supplied)

A Catholic nun in India’s Kerala state has been hailed by farmers after she obtained a court order to allow her to kill wild boars that destroy crops.

Sister Jophy Joseph, a member of the indigenous Congregation of the Mother of Carmel, obtained permission from Kerala High Court on Sept. 18.

A government ban on killing wild animals has divided farmers and conservationists, with farmers claiming that lopsided policies have led to a big increase in the number of wild animals such as boars near human habitations in hilly areas of the southern state.

They say wild animals threaten their lives and properties besides destroying labor-intensive farming such as cassava and banana cultivation.

“The court has given me permission to kill the wild boars using any means. I can shoot, trap or use any other means convenient to me,” the nun told UCA News.

Sister Joseph, an aided school Hindi teacher, ventured into farming during a Covid-19 lockdown and gradually planted crops such as cassava, vegetables and other crops on her convent’s 4-acre farm in Muthukadu in Kozhikode district.

It really helped me understand the painful situation in which our farmers live. I wanted to do something for them to overcome this terrible crisis

One day when she went to water her crops she found them destroyed.

“I was taken aback at this sight,” she recalled. “I watered them for two months. I worked hard under the scorching sun. But now everything was destroyed. It was really painful for me. I wanted to fight back,” she said.

“It really helped me understand the painful situation in which our farmers live. I wanted to do something for them to overcome this terrible crisis.”

She filed a petition with her neighbors to the high court seeking permission to kill the wild boars, which sometimes attack people. 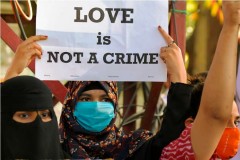 The court granted permission to her and 12 others under the banner of We Farm, a Catholic-supported farmers’ movement.

“We have been fighting for permission to kill the wild boars that destroy our crops, but neither the state government nor the federal government has evinced much interest in setting the law in abeyance to protect our crops,” Joy Kannanchira, chairman of We Farm, told UCA News.

“With the news of the nun getting permission to kill wild boars, we have been flooded with calls for support. The nun has now become a new icon to highlight the woes of farmers.”

Jijo Thomas, a farmer and one of the petitioners, said their demand to end the wild boar menace “seems to be inching close to reality after the nun stepped in to help us.”

Since people eat wild boar meat, we want it to be distributed among the farmers who lost their crops as compensation

“Once an animal is killed, its corpse will have to be handed over to forest officials, who in turn burn it or bury it in the mud but do not permit people to eat it. We want this practice too abolished,” he added.

“Since people eat wild boar meat, we want it to be distributed among the farmers who lost their crops as compensation.”

Sister Joseph also wants permission to be granted for farmers to eat boars. “Why do we waste meat useful for consummation?” she asked.

As she has no licensed gun, the nun and others will lay traps to catch boars.