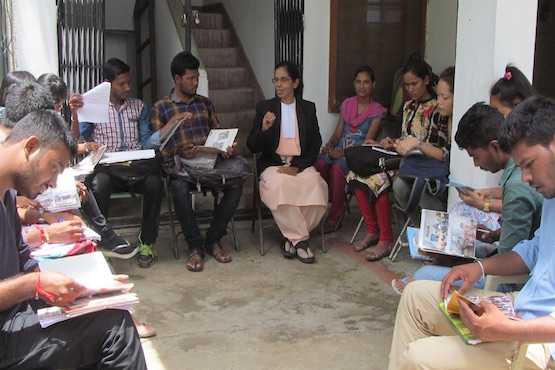 Sister Sister Philomena Pichhappilly giving a class about legal rights to a group of young social work students who joined her for field studies in a slum in Nagpur. (Photo supplied)

Nagpure stood inside the door of her tin-shed-like home in a corner of a sprawling slum. The nun stood outside, talking to the resident, who was afraid to come out.

"I was a timid woman, afraid to step out of my home on my own and did not know how to interact with people," said the 56-year wife of a rickshaw puller in the slum near Nagpur, in the western Indian state of Maharashtra.

That was 17 years ago when her family, and many thousands like them, lived in abject poverty. For Nagpure the income of only her husband, Santosh, was not enough even to feed the five-member family, including three children.

The meeting with the nun was the beginning of change. "Today our lives have been transformed," said Nagpure. There is a tailoring school for children in the slums, where 100,000 people live, as well as training opportunities for women.

Sister Pichhappilly, a member of the Sisters of St. Joseph of Chambery, taught Nagpure and other women to become more self-reliant, rather that depending on the often-paltry incomes of their husbands.

Some 5,000 women have been brought together through more than 120 self-help groups.

Sister Pichhappilly said when she arrived in the area, people had few basic amenities such as roads, electricity, potable water, medical care or educational opportunities.

After working for five years from her convent, she decided to live inside the slums with another nun, Sister Lisy Vallooran from the same congregation.

To get to their hut, the nuns had to cross foul smelling lanes flowing with raw sewage and plagued by mosquitoes.

"Now we don't need to depend on our husbands for money, our children are going to schools and many talented children are doing their higher studies," Napure said. "And above all, we now fight for our rights."

The slum area these days has tarred roads and water taps as well as electricity connected to every household.

Sister Vallooran told ucanews.com that the nuns organized residents to gain legal status for their abodes as well as the manning, for safety reasons, of an open railway crossing.

Ranjana Dharve, a 55-year-old resident, says her family started making incense sticks helped by a small loan from a self-help group. Earlier, her husband Suresh Dharve, 60, worked as a shop hand. Now they are independent.

Sister Pichhappilly also helped organize several protests in support of the rights of slum dwellers. A notable victory was when the government was forced stop development of a waste dump on local residential land.

The nun said she did not preach about Christianity, however, some residents developed a faith in Jesus despite not officially becoming members of the Church.

People making "mischief' by suggesting her goal was religious conversion had not succeeded as she had popular local support, Sister Pichhappilly said.

Early this year the nun was elected provincial superior of her congregation's Nagpur province for four-years. Although she now has a hectic schedule, she still keeps a close eye on developments in the slums.

Sister Pichhappilly said she hopes to go back to the slums once her term as provincial superior is finished.