Indian commuters stretch their legs at a railway station stop in India in this file photo. A Catholic nun and four tribal girls were detained by police while traveling on a train in Madhya Pradesh state. (Photo by Sanjay Kanojia/AFP)

Police in the central Indian state of Madhya Pradesh temporarily detained a Catholic nun and four tribal girls travelling with her by train, an act religious leaders say targets the free movement of Christians.

The complaint alleged that the nun was taking the tribal women to be converted to Christianity, an act that is restricted under state law.

This is the third such incident within a month of Christians traveling in groups being arrested by police in the Madhya Pradesh.

Railway Police on June 13 detained Sister Beena Joseph and the young tribal women for 12 hours. The Catholics were traveling from neighboring Jharkhand to study at a church-run education institution in Bhopal, capital of Madhya Pradesh state.

Police took them away at Satna railway station, some 450 kilometers before their destination, saying they needed to interrogate them following some complaints, the nun who belongs to the Carmelite Sisters of St. Teresa congregation, told ucanews.com June 14.

"They were interrogated, kept in police custody for 12 hours, and released only at around midnight," said the nun.

Hindu groups such as the Bajrang Dal, who work to establish a Hindu-only India, are openly opposed to Christian missionaries and their work.

Christian leaders also accuse these groups of attacking church prayer programs in central India to keep people away from Christianity.

The state government is run by the pro-Hindu Bharatiya Janata Party, considered the political wing of such Hindu groups. 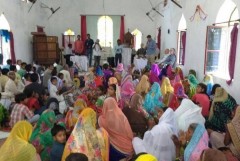 The Madhya Pradesh Freedom of Religion Act makes conversion from Hinduism a punishable offence if done through force, allurement or appeasement. One can legally change one's religion only with the permission of local government officials.

John told ucanews.com that any activity such as providing education, health care or a simple sermon can be interpreted as force, allurement or appeasement.

On May 21, some 60 tribal children from Jhabua district, who were on their way to Nagpur for a summer camp, were detained. Charges of illegally attempting to convert them were filed against nine church people escorting the children. However, the case collapsed when parents of the children produced documents to show that they were already Christians.

Next day, police detained 11 tribal children at Indore bus station, the commercial capital of Madhya Pradesh state. Two people with them were arrested and jailed on conversion charges. The children were also going to Nagpur to attending a summer camp.

"Nearly 80 similar incidents have taken place in the state alone," says Shibu Thomas, founder of Persecution Relief, an ecumenical forum that records persecutions against Christians and provides legal and other aid to the victims.

According to Thomas anti-Christian violence is on the rise throughout the country and more than 300 incidents of attacks have reported this year alone.