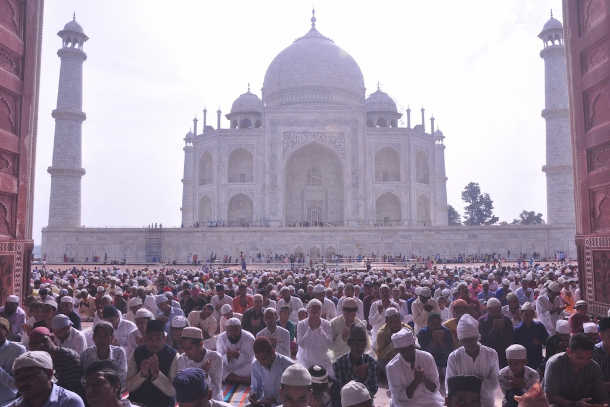 Muslims offer prayers during Eid-ul-Zuha at the mosque in the Taj Mahal complex in Agra on Aug. 22. (Photo by IANS)

Indian Muslims are upset about a directive that restricts Muslims who wish to pray at the iconic Taj Mahal in Agra city of Uttar Pradesh state.

The Archaeological Survey of India (ASI), which is tasked with the monument's management, said in a Nov. 5 order that only Muslims living around the Taj Mahal can pray on Fridays in the mosque adjacent to the mausoleum.

Namaz (prayers) can only be offered on Fridays. Imams and staff can enter the mosque only from noon to 2 p.m., according to the order.

The world-renowned mausoleum was built by Mughal emperor Shah Jahan in memory of his wife in 1658.

The UNESCO-designated world heritage site receives more than 200,000 overseas tourists and some 4 million local tourists every year. But Friday is a holiday when no tourists are allowed.

The ASI said it was only implementing a July Supreme Court order that only residents of Agra should be allowed to enter the mosque for congregational prayers as unregulated entry could adversely affect the monument.

However, leaders of Muslims, who comprise 14 percent of India's 1.2 billion people, say the order is unnecessary.

Molvi Mohammad Amin, a Muslim cleric based in Jammu, questions how prayers could adversely affect preservation of the mausoleum.

"For the past more than 300 years, Muslims have prayed in the Taj mosque. If prayers had affected it, the structure wouldn't still be the most beautiful in the country," he told ucanews.com.

He said the ban was part of the anti-Muslim policies of the state and federal governments run by the pro-Hindu Bharatiya Janata Party (BJP).

"The order is illegal and arbitrary. The party in power has an anti-Muslim mindset and I am meeting with the government to sort out the issue," he told media soon after receiving a copy of the ASI order.

"If there is a mosque, Muslims hailing from anywhere in the world can pray there. The order issued by the government is bizarre and unnatural to the core," he said.

"The government wants to project that Muslims who want to pray there are destroying the mausoleum. Is that acceptable?"

Many Hindu organizations have been raising objections over the Taj Mahal, calling it a "blot on Indian culture" because it was built by a Muslim king during Muslim rule in a Hindu-majority land.

Senior BJP leader Sangeet Som in October last year claimed that the monument was built by "traitors and those who wanted to wipe out Hindus" from the country.

The state government led by BJP leader Yogi Adityanath has not allocated any special budget for the preservation of the Taj Mahal since the party came to power in the state in 2017.

In an interview this year, Adityanath claimed that that if required he will not hesitate to change the Taj Mahal's name to "Ram Mahal." Ram is a revered God in Hinduism.