Community will no longer be neglected, cleric vows 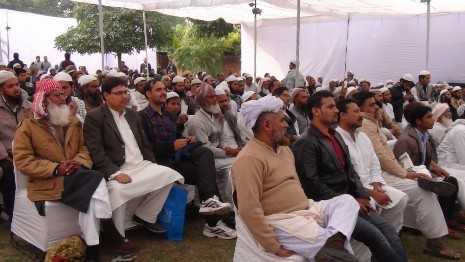 Indian Muslim leaders have formed a committee to help Muslim voters choose a political party that represents the community's interests.

"Muslims have always been neglected and used as a vote bank by political parties. Nobody has delivered on their promises made for the community," Ahmed Bukhari, head cleric of Jama Masjid mosque in Delhi, told ucanews.com during a convention of Muslim leaders in New Delhi.

Around 250 people participated in the February 22 convention.

Bukhari said the leaders agreed to form an 11-member committee by the end of March that would grade the performance of all political parties. The committee also will consider views of community members before submitting a final report before the general election due in May.

"We will have to go by the suggestions given by the committee. All political parties are harmful and we have to choose the one which is least harmful for us as there is no time left for us form a political party," he said.

At the meeting, speakers also expressed concern over the failure of secular parties like Congress in protecting the rights of Indian Muslims.

The participants also decried alleged targeted violence against Muslims by communal forces, citing recent riots in Muzaffarnagar in Uttar Pradesh and the 2002 Godhra riots in Gujarat.

A total of 60 people died and 50,000 were displaced during the Hindu-Muslim riots in Muzaffarnagar in August last year.

The Gujarat violence, which went on for several days, resulted in the death of 790 Muslims and 254 Hindus in February 2002.

Mufti Mohammad Ashraf, president of Muslim Personal Law Board in Moradabad, Uttar Pradesh, asserted that Muslim politicians had become slaves to political parties and no longer represented their constituents.

"They don't think about the community any more. Now it is on us to change our situation and not let these politicians exploit us by giving fake promises," he said.

In some parts of India, Muslims form a large voting bloc and can influence the outcome of general and state elections.

According to a 2011 census, Muslims are the second largest religious community in India after Hindus, constituting 13.4 percent of India’s 1.2 billion population.

Muslims form a majority in Jammu and Kashmir states in northern India, and represent about a quarter of the population in Assam, West Bengal and Kerala.