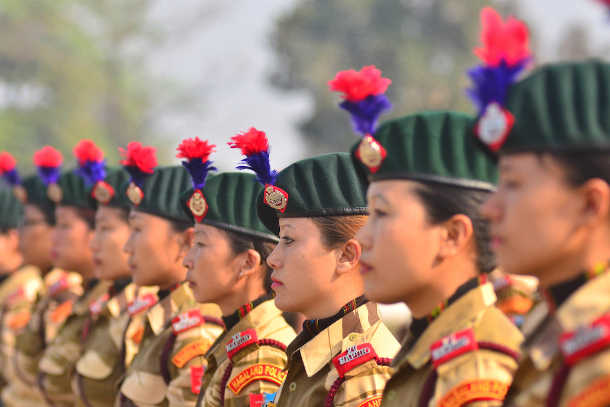 Women from the India Reserve Battalion of the Nagaland Armed Police stand in formation during Republic Day celebrations in Dimapur in Nagaland state on Jan. 26, 2019. Migrants from the region working in other parts of India have complained of being called Chinese and coronavirus carriers. (Photo: Caisii Mao/AFP)

Migrants from India's Christian-dominated northeastern states have complained of discrimination, saying they are accused of carrying coronavirus just because of their Mongoloid facial features.

Northeastern youths in national capital New Delhi and other cities have complained of being turned away from grocery shops and supermarkets for fear that they could be carrying the virus.

As coronavirus was first reported in China last December, some Indians have linked the virus with people from the northeast who they think look like Chinese people.

Several videos have gone viral showing young people from the northeast being denied entry to shops under the pretext that they carry coronavirus."We too are Indians ... please do not discriminate us," screamed a young man in a video after he was denied entry and stood outside a store.Mizoram state's Chief Minister Zoramthanga shared one such video on his social media account and sought the intervention of Prime Minister Narendra Modi to end the discrimination."I am pained, shocked and in my worst awe seeing this video! When has humanity stooped so low?" Zoramthanga tweeted, sharing the video, reportedly shot in the southern state of Karnataka.The Commonwealth Human Rights Initiative (CHRI), an independent group, has also urged Modi to address the issue."Working professionals, students and ordinary residents of this country have been called 'corona' or 'Chinese' and held responsible for bringing the virus to India," the CHRI wrote in a letter to the prime minister.Thomas Ngullie, a former minister of Christian-dominated Nagaland state, told UCA News that "continued humiliation or racism against ethnic groups from northeastern India can cause unexpected and unprecedented social conflicts in the country.""If such acts of discrimination continue against the Mongoloid race in India, the consequences may be bitter," Ngullie warned.An official from the state-owned Indian Council for Medical Research told UCA News that even after the 21-day lockdown ends in India on April 14, a vigil should continue in the northeast because of its high-risk neighbors.The northeast is landlocked by five countries — China, Bhutan, Nepal, Myanmar and Bangladesh — and is cut off from mainland India except for the 20-kilometer-wide Siliguri Corridor.The states of Nagaland, Manipur, Mizoram and Arunachal Pradesh share a border with Myanmar, which has a 2,185-kilometer border with China.India has enforced strict regulations over the crossing of its border with Myanmar.At least 26 Mizo people, including 10 children, were forced to spend the night on a bridge along the India-Myanmar border on March 29. They were returning to India after attending a wedding in Kapel town in Myanmar. The bridegroom reportedly tested positive for Covid-19 later.

Mizoram has some 1.12 million people, 88 percent of them Christians, mostly Baptists.

Tribal Christians dominate four of the seven northeastern Indian states — Nagaland, Mizoram, Meghalaya and Arunachal Pradesh.In Baptist-dominated Mizoram, the only confirmed Covid-19 case was of a pastor who had returned from Amsterdam after a European tour.In Meghalaya, more than 3,000 people have been kept under surveillance, though the state has not reported any confirmed coronavirus case.Individual Christians and a few pastors of Mizoram churches undertook mass prayers on March 28 evening to seek heavenly intervention from the deadly coronavirus.A spokesman for the Mizoram Kohhran Hruaitute Committee, a conglomerate of 16 major churches under the Mizoram Presbyterian Church of India, said the special prayers sought "the merit of the people of Mizoram, India and the entire world."Churches in Mizoram have decided not to observe Good Friday and other Easter-related prayer services due to the Covid-19 outbreak in India, which has reported 1,397 confirmed cases and 35 deaths, according to Johns Hopkins University data on April 1.