Indian lockdown leaves the poor out in the cold

India officially has 1.77 million homeless people. How will they quarantine themselves at home? 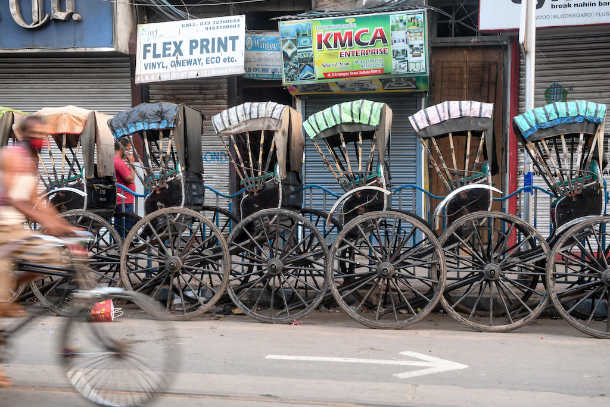 Rickshaws are parked on a roadside in Kolkata on March 25 on the first day of a 21-day government-imposed nationwide lockdown as a preventive measure against the coronavirus. (Photo: Dibyangshu Sarkar/AFP)

Political decisions can often be ruthless and are rarely sympathetic. But in times of an emergency, such categorizations may defy logic. Indian Prime Minister Narendra Modi's decision to shut down India was such an emergency decision.

Modi gave just a four-hour notice to India's 1.3 billion people to shut down all public activities and stay inside their homes for 21 days, starting from midnight of March 24, to help fight the spread of coronavirus. Police are on the streets to implement the complete shutdown of India.

The decisive step came as positive cases of infection reached 536, with 10 deaths. The government aims to arrest "community spread" of the virus among densely populated towns and cities where the spread of the virus could spell disaster.

Anyone breaking the three-week lockdown by just coming out of their homes could be punished up to two years in jail. The stringent measures, let us hope, will check the spread of the disease.

However, there are some nagging questions. India officially has 1.77 million homeless people. They sleep on the sidewalks or in rail or bus stations. Where will they go to home quarantine themselves? How will the state check the spread of the virus among them?

An estimated 23 percent of Indians or some 276 million people live on less than 100 rupees (US1.25) a day. They live below the poverty line, not having enough to have a full meal a day. The majority of these people are daily laborers, such as those who work in wayside restaurants or as rickshaw pullers. When they cannot work for 21 days straight, how are they expected to feed themselves and their families?

India has a workforce of 400 million people, roughly one third of its population. However, only about 10 percent of them enjoy the benefits of a fixed salary. In other words, 360 million people depend on their daily engagement to put food on the plates for their families, each having four people on average.

They include countless housemaids, millions of faceless farmhands, unskilled laborers on construction sites, contract laborers like masons, carpenters, roadside vendors and India's noted chai-wala or roadside tea sellers, which Modi claimed to be as a teenager.

People, in general, appreciate the prime minister's intention. But the poor lament the fact that their government spared no thought for their survival in such a lockdown, which stopped work of all sorts for three weeks.

"You have to remember that life is more important than anything else and survival is the key ... One can conquer only if he has life," Modi said, using stylish Hindi and sounding helpless about the impact of the killer disease.

If Indians cannot handle these 21 days of lockdown, "you will set your families and the country 21 years behind," he warned.

The lockdown, done for the survival of all Indians, now threatens the survival of millions of poor people. Opposition parties are asking the government to find ways to help the poor and ensure ordinary people have enough supplies of food and water.

"We ask Prime Minister Modi with folded hands not to leave thousands of common people and poor people to their fate," opposition Congress party leader Randeep Singh Surjewala said. He said the lockdown should have come with some government support to the poor who survive on daily earnings.

Former finance minister and Congress party leader P. Chidambaram tweeted that he is "certain the PM understands the urgency of announcing a financial package and putting cash in the pockets of the poor."

He said Modi's announcement had left him with a "mix of emotions — relief, vindication, frustration, disappointment." If people cannot even step out of their homes, "how are farmers going to harvest their crops beginning April 1?"

Congress spokesman Surjewalla said the government should make arrangements for immediately depositing 7,500 rupees (some US$100) each in the bank accounts of the poor and marginalized sections of society.

Jeetan Nai, a barber in the eastern part of Delhi, said Modi seems to have ignored millions of people like him whose food depends on their daily work.

"We understand the dangers of coronavirus. But how can we survive without work? We have no savings. We have a hand-to-mouth existence. The prime minister's announcement has crippled our lives," Nai said.

In his televised speech, which was also made available on the radio, Modi asked all employers to pay their employees their full month's salary. But he was silent about people who earn a daily wage.

Kamli Kumari, a housemaid who shares her time between several houses, said although her wage is considered daily, she gets paid at the end of the month when her masters get their salary.

"Some people are kind-hearted and will pay us for this whole month, more so as the prime minister has asked them to do so," Kumari said.

"But most people, especially in Delhi, do cut the pay for non-working days. They have a different approach to poor people. They look for excuses for not paying people like us."