Widespread use of pellet cartridges in crowd control is leaving too many casualties, groups say Hamid Nazir, 16, sits in a hospital bed in the restive north Indian state of Jammu and Kashmir. His eyes are swollen and purple-colored, and his face — pock-marked with wounds — will most likely be scarred for life.

Nazir was hit directly in the face with the blast from a shotgun fired by police to disperse protesters in Srinagar, the state’s summer capital, on May 21. He was taken to a hospital where doctors told him that he had lost the vision in one of his eyes.

He said he was watching a gathering in the city to mark the anniversary of a separatist leader’s death when things got out of hand and violence erupted, with protesters pelting security forces with stones.

“One policeman fired his shotgun directly at me. I was not among the protesters. The ones who had thrown stones at the police had already fled and I became a victim,” said Nazir.

Authorities say he was throwing stones at a police vehicle, an accusation Nazir vehemently denies.

Doctors who treated Nazir say he is suffering from “intra-ocular” injuries from the shotgun’s metal pellets, and the chances of his vision being restored are “minimal”.

Many people in Kashmir want an end to Indian rule and either full independence or a merger with Pakistan, which also claims the territory.

At least 50,000 have died in an insurgency that began in 1987. Over the years, anti-government rallies have occurred frequently, raising tensions between security forces and civilians, which have led to accusations of police heavy-handedness in trying to impose order.

Shotguns were introduced in Muslim-majority Kashmir as a “non-lethal” alternative to bullets to be used against protesters after security forces killed nearly 200 people during demonstrations against Indian rule from 2008 to 2010.

The state government’s reasoning was that when fired from a distance, shotgun pellets disperse and inflict only minor injuries. 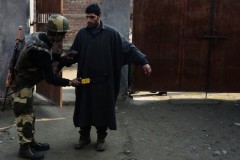 The aim of reducing fatalities seems to have worked, with no deaths being reported since 2010 as a result of the use of shotguns.

However, in a reply to a Right to Information query filed by human rights activist Manan Bukhari, the state government has revealed that 800 people, mostly aged 14-30, have suffered various injuries from pellets since 2010.

At least 165 of these people were seriously hurt, with many suffering facial injuries.

Doctors in local hospitals say that in most cases involving a serious injury, the victims were fired at from close range and often it was their upper body that was targeted.

Concerned about the damage caused by the use of shotguns by security forces in Kashmir, Amnesty International on May 27 called on the state government to prohibit their use in policing demonstrations, “as they are inherently inaccurate and indiscriminate”.

“The police have a duty to protect lives and prevent violent crime. However, in carrying out this duty they must as far as possible use non-violent means,” said Shemeer Babu, Amnesty International India’s program director.

“When the use of force is unavoidable because of compelling reasons, it should be only what is strictly necessary and to the extent required,” he added.

Babu said police must also distinguish between persons engaging in violence and peaceful demonstrators or bystanders.

Any force used should only be against those acting violently, and the police should always ensure that uninvolved persons are protected from injury, he added.

The State Human Rights Commission also believes that the use of shotguns by security forces is leading to serious injuries.

Law enforcement agencies, it says, are bound to strictly follow standard operating procedures and adhere to the use of non-lethal methods of crowd control in order to prevent casualties.

“It must be the endeavor of law enforcement agencies to use minimum force, which will not result in casualties or serious injuries,” the commission said.

When 17-year-old Amir Kabir Beigh left his home to buy medicine in Srinagar in 2010, little did he know his life was about to change forever.

Pellets fired by security forces, who at the time were chasing protesters, hit Beigh in the face. He suffered extensive damage in both his eyes and was blinded.

Human rights groups in Kashmir have already submitted a petition with Kashmir’s High Court seeking a ban on the use of shotguns.

They say security forces can use other means to control crowds such as water cannons.

“Pellets are not being used against rioters in other parts of the country, but here in Kashmir they are being used quite openly without any remorse from the government,” human rights activist Khurram Parvez, who is also a program coordinator of the Jammu and Kashmir Coalition of Civil Society, said this week.

The state police are aware of the injuries being caused by shotgun pellets.

“We are looking into these things. We would like to avoid any sort of casualties. We are also concerned,” K Rajindra, state police chief, said in response to Amnesty International’s call to ban shotguns.

“They [the victims] are our own boys and we are certainly concerned about them. We are looking into all aspects as to how to minimize any sort of casualties,” he said.