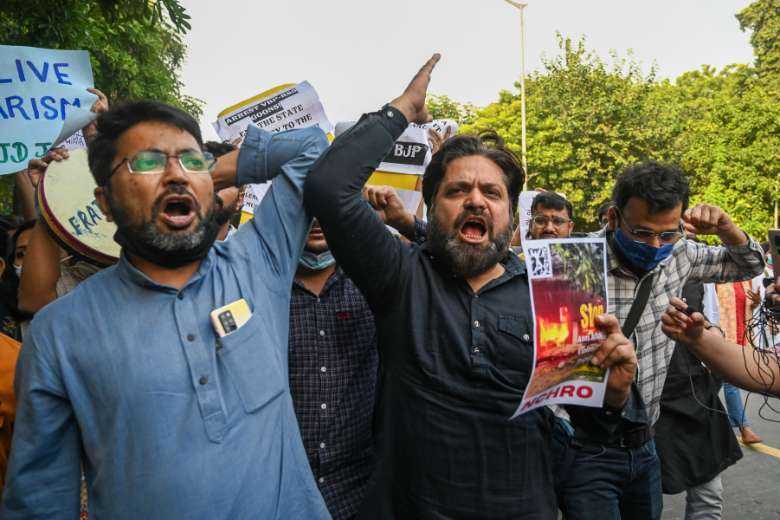 Activists of All India Students Association and other student unions shout slogans against recent incidents of violence in Tripura state during a protest in New Delhi on Oct. 29. (Photo: AFP)

Lawyers and journalists are among dozens of people being investigated by police in India over posts on social media about anti-Muslim violence in a case that has stoked concern about freedom of speech in the world's largest democracy.

Authorities on Nov. 7 opened a criminal investigation into the owners of 102 social media accounts under strict anti-terrorism legislation for allegedly sharing "fake news" about mob attacks on Muslims in the remote northeastern state of Tripura last month.

They include several prominent Indian journalists, an Australian journalist and a law professor based in the United States. The majority of those under investigation are reportedly Muslims.

It follows violence targeting at least four mosques and Muslim-owned homes and shops in Tripura as Hindu groups rallied against the killings of minority Hindus in neighbouring Bangladesh.

Police said the owners of the Twitter, Facebook and YouTube accounts were being investigated for allegedly aiming to instigate further violence by sharing misleading visuals and text on social media.

A case has been opened under the anti-terror Unlawful Activities (Prevention) Act (UAPA), vaguely worded legislation that allows people to be held for six months without charge.

Most of the offending posts had been removed by Nov. 7. Those that remained online largely appeared to be highlighting the plight of Muslims targeted in the attacks.

C.J. Werleman, the Australian journalist, had tweeted that Indian Prime Minister Narendra Modi had not condemned the unrest and that Muslim protesters against the violence had been detained.

"27 confirmed attacks by Hindutva mobs on mosques and Muslim-owned properties in Tripura during the past week," Werleman, a reporter with Byline Times, tweeted on Oct. 30.

Indian journalist Shyam Meera Singh, another of those being investigated, said he had tweeted "Tripura is Burning!"

He shared screenshots of an email from Twitter that said the social media giant had received a request from Tripura police to take action against his account.

Reporters Without Borders said on Nov. 8 that it "firmly condemns" the investigation against the journalists whose "only crime was to cover recent attacks against mosques in the northeastern state of Tripura".

The Editors Guild of India demanded an investigation into the riots "instead of penalising journalists and civil society activists".

Critics say there has been an increase in attacks on the 200-million Muslim minority community in India under Modi's government. The government denies the allegations.

"Pointing out that #Tripura_Is_Burning is a call for corrective action. But BJP's favourite cover-up tactic is shooting the messenger. Truth can't be silenced by #UAPA," he tweeted.