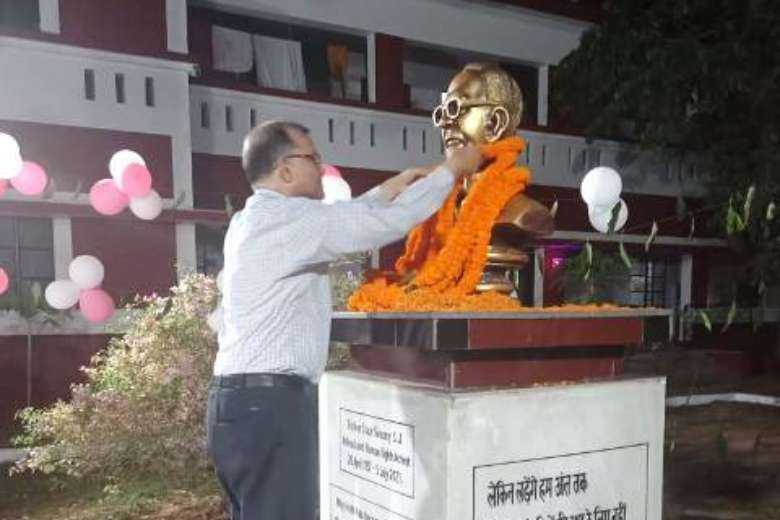 The 85th birth anniversary of Father Stan Swamy, the first since his death, was observed with the release of a book and unveiling of his bust at Bagaicha, a training and social action center he founded in the eastern Indian state of Jharkhand.

Elsewhere in the country, members of the Indian Church and civil society remembered the martyred Jesuit’s contributions to upholding the human rights of the most marginalized sections of society.

The main event was held at Bagaicha in Namkum, Ranchi, on April 26 where the two-foot-high bust of Father Stan stands tall overlooking the institution he founded in 2006.

Keeping his memory alive, Bagaicha continues to empower individuals and organizations working against the displacement of marginalized people, human rights violations, illegal land acquisition and confinement of tribal people by branding them as Maoists.

Also released on the occasion was the Hindi version of the priest’s memoir containing his writings during a visit to southern India in 2019 and poems and diaries written during his imprisonment at Taloja Central Jail in Maharashtra state in western India.

Father Stan was detained in the jail after his arrest at Bagaicha in connection with the Bhima-Koregaon violence case in October 2020. He was robbed of timely medical care and repeatedly denied release on bail despite his deteriorating health. After over nine months in jail, the 84-year-old Jesuit died in judicial custody at a private hospital in Mumbai on July 5, 2021.

“We have to stand for justice in society, especially for the tribal peoples, Dalits and the downtrodden, as Father Stan did”

His death caused much outrage across India and continues to rankle many. “Father Stan did not die but was killed in prison … because he stood for the rights of the voiceless tribal peoples,” said Apoorvanand Jha, a professor from the University of Delhi.

Jha, a renowned rights activist, was speaking at a seminar-cum-book release event organized by the Federation of Associations of the Catholic Archdiocese of Delhi. He urged the gathering to continue to stand for justice and protest the conspiracy that caused Father Stan’s imprisonment and death.

Some 100 people including priests, nuns, activists, academics and lawyers were present.

Farah Naqvi, an activist-writer, recalled how Father Stan had stood for the truth and objected to the injustices done to the least of the people. She compared his life to the parable of the sower in the Bible and said the Jesuit had “prepared the ground so that the seed could flower and bear fruit, a hundred or thousandfold.”

Monsignor Susai Sebastian, former vicar general of Delhi Archdiocese who moderated the program, hoped the Jesuit’s life and works would continue to inspire many more people.

Father Savarimuthu Sankar, spokesperson of Delhi Archdiocese, said: “We have to stand for justice in society, especially for the tribal peoples, Dalits and the downtrodden, as Father Stan did.”

Father Jerome Stanislaus D’Souza, president of the Jesuit Conference of South Asia, thanked all who had gathered for their solidarity with the Jesuit family and assured that the “Jesuits will continue to fight for justice.”