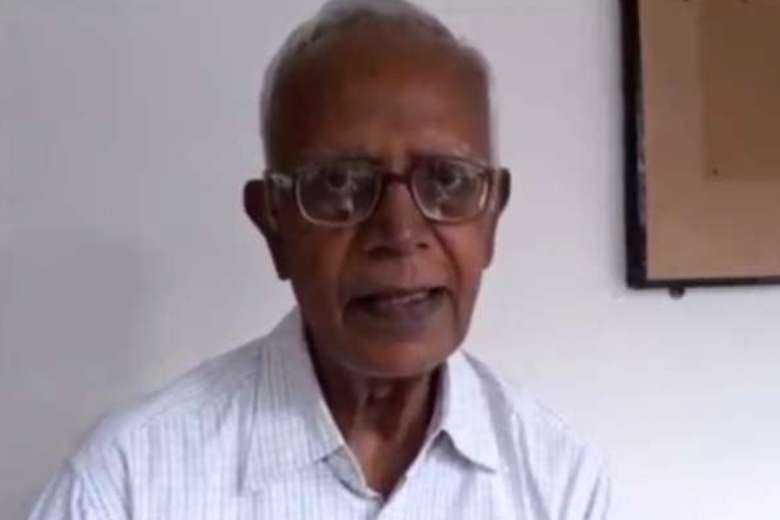 A screengrab from a video where Father Stan Swamy explained why police wanted him in a conspiracy case.

An elderly Indian Jesuit priest languishing in jail on a treason charge has sought a copy of his laptop hard drive after a US-based digital laboratory reported that a hacker had planted incriminating evidence in the computer of another accused in the same case.

Father Stan Swamy, 84, is among 16 people accused of collaborating with a banned Maoist group to organize violence in the Bhima Koregaon area of Maharashtra after a clash there killed one person and injured several on Jan. 1, 2018.

The National Investigation Agency (NIA), a federal anti-terror combat agency, arrested Father Swamy on Oct. 8 and remanded him in custody in a jail in Mumbai, the capital of Maharashtra. His bail applications have been repeatedly rejected.

“Father Swamy has sought a cloned copy of his laptop and hard drive, which the NIA should have given him following his arrest, but to no avail,” Father A. Santhanam, who is closely following the case, told UCA News on Feb. 14.

Father Swamy's counsel presented a detailed argument before the NIA court on Feb. 12 for his demand for a cloned copy of the laptop and hard drive. The court directed the lawyer to approach the NIA office.

The court also heard another bail application of the priest but the NIA, which continues to investigate the case, sought time until Feb. 16 to submit the case diary to help the court decide on bail.

Father Santhanam, a Jesuit lawyer practicing in southern India, regretted that the NIA was obstructing the bail demand of Father Swamy, who is suffering from Parkinson’s disease among other age-related health issues.

Before his arrest, Father Swamy had expressed concern that investigators could manipulate his computer, which they confiscated from him, to plant proof of his collaboration with Maoists and other allegations against him.

His fears gained ground as Arsenal Consulting, a Massachusetts-based digital forensic laboratory, said on Feb. 11 that a hacker had planted incriminating evidence in the computer of Rona Wilson, among the accused in the case.

The US firm analyzed an electronic copy of Wilson’s laptop and concluded that an attacker used malware to infiltrate the laptop and plant documents on it.

The attacker created a hidden folder and at least 10 incriminating letters were delivered into it without the knowledge of Wilson, who is also languishing in jail like Father Swamy.

The NIA arrested Wilson and accused him of colluding with Maoist rebels in conspiring to assassinate Indian Prime Minister Narendra Modi, mostly based on the incriminating documents.

The unidentified attacker, the report said, used malware to control and spy on the laptop. Subsequently, Wilson received emails that appeared to be from a fellow activist urging him to click on a link to download an innocuous statement from a civil liberties group. But this link deployed the malicious software that allowed a hacker to access Wilson’s computer.

The report shows how the attacker had retained access to Wilson’s computer for over 22 months, starting June 13, 2016, and used a remote access facility for planting the incriminating letters while conducting the surveillance on his activities without Wilson getting a hint of it.

The forensic lab also found that the malware logged Wilson’s keystrokes, passwords and browsing activity, raising doubts about the credibility of the NIA evidence against those arrested.

Rights groups say all the 16 arrested are rights workers who at some point criticized or opposed policies of the federal government run by the pro-Hindu Bharatiya Janta Party (BJP).