A view of Jesuit-run Stockmann Memorial Middle School, where five anti-trafficking women activists were abducted at gunpoint and gang-raped in June 2018. (Photo: AFP)

A court in eastern India has acquitted a Jesuit priest of not reporting a rape to police, but he remains in jail convicted of charges in the same case.

Khunti District Court in Jharkhand state acquitted Father Alphonse Aind and five others on Dec. 5. It cleared them of charges of not reporting the crime to police, administering a drug with intent to commit an offense and criminal intimidation.

Father Aind was jailed on May 17 after the court found him guilty of abetting rape and sentenced him to life imprisonment. His appeal is pending in the High Court.The latest acquittal comes based on a second complaint filed on June 21 by Sanjay Sharma.The second case “was registered to harass the priest in violation of the law,” said Father Masih Prakash Soy, secretary to the bishop of Khunti. He said it was against Indian laws to conduct a trial twice for the same crime.
Related News 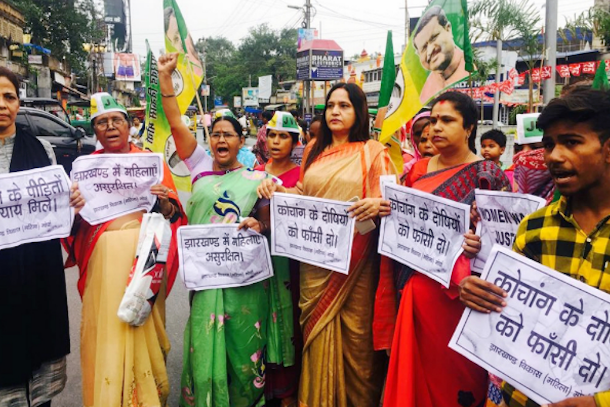 Police arrested Father Aind on June 22, 2018. At the time, he was the principal of Jesuit-run Stockmann Memorial Middle School in remote Kochang village in Khunti Diocese.The arrest was based on a June 19 rape case. Six men abducted and raped five young women who were staging a street play in the priest’s school to create awareness among local indigenous people.The police registered the case on June 21, two days after the incident, based on the complaint of a rape victim.Police say the priest saved two Urseline nuns who were working with the abducted women but he failed to report the crime. Conspiring harassment Father Aind was convicted of conspiring with rapists, not reporting the crime to police and attempting to destroy evidence.Police say the street play angered the attackers because it expressed sentiments against Pathalgadi — a movement asserting tribal autonomy over villages as per provisions in the Indian constitution.The movement has been projected as a rebellion against policies of the state’s pro-Hindu Bharatiya Janata Party (BJP). Tribal leaders have been complaining that government policies aim to take away their land and resources in the name of development projects.“We have trust in the judiciary and are sure that Father Aind will get justice,” Father Soy said, referring to the Jesuit’s pending appeal in the state’s top court against the conviction.He said the Jesuit was “falsely implicated in the case,” aiming to “target the Christian priests and nuns who work for the welfare of the poor” tribal people.Christians, led by some Jesuit priests, were at the forefront of mass marches in the state that forced the government to withdraw some proposed amendments to land laws. The proposed changes wanted to end restrictions on buying tribal lands and empower the government to take away tribal lands.“We are now targeted for serving the poor, a new challenge for missionaries in the state,” Father Soy said.Christian leaders say the rape case is also part of a pro-Hindu strategy to keep people away from Christian churches and missioners. Hardline Hindu groups are working to make India a nation of Hindus.The Christian population in the state is higher than the 2 percent national average. More than one million of the 32 million people in Jharkhand are Christian, almost all of them tribal people. Christians form 25 percent of the 532,000 people in Khunti district.
Support our Catholic journalism with a contribution of any size
Your contribution will help the Catholic journalists and editors in UCA News to report news, features, commentaries, video stories and podcasts on issues affecting the lives of millions of Catholics around the world.
Here is a gift of two valuable books as a token of appreciation to you.
Check your mailbox for links to these PDF/e-Books.