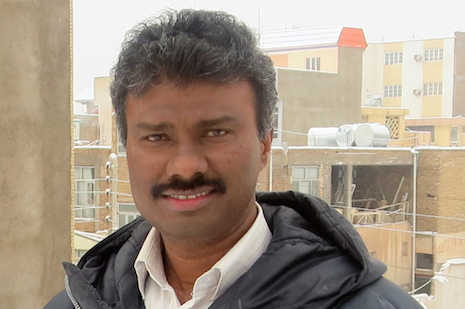 The director of Jesuit Refugee Service (JRS) in Afghanistan was abducted on Monday afternoon by a group of unidentified men from Sohadat village outside Herat, according to Jesuit Provincial of South Asia Fr Edward Mudavassery.

Fr Alexis Prem Kumar, 47, was visiting a school for refugee Afghan children recently returned from Iran and Pakistan at the time of the abduction.

“There was no violence. The kidnappers just came and took the priest with them,” Fr Mudavassery told ucanews.com.

“The Indian consulate in Herat and the Afghan security forces have been informed and a search has begun to find the priest,” he said.

Security officials in Afghanistan have interviewed a group of teachers who were with Fr Kumar at the time of his abduction, Fr Mudavassery said.

Syed Akbaruddin, spokesperson for the federal External Affairs Ministry, said via a Twitter post that Indian officials in Herat were pursuing the matter with local authorities.

No group has yet claimed responsibility for the abduction, Fr Mudavassery said.

“We are keeping our fingers crossed and very much concerned about the well being of [Fr Kumar].”

The kidnapping follows thwarted attack last month on the Indian consulate in Herat by four armed gunmen who were killed by consulate guards.

Jesuits work in several areas of Afghanistan and generally keep a low profile, but in Herat “we are the only Indian NGO, so we might be more visible,” Fr Mudavassery said.

“Our people have not been out much after the attack [on May 23] because there was talk of possible attacks on Indians in the region,” he added.

Fr Kumar is a member of the Madurai Jesuit province in Tamil Nadu in southern India. He has served in Afghanistan for the last three years and has worked with JRS for more than a decade.