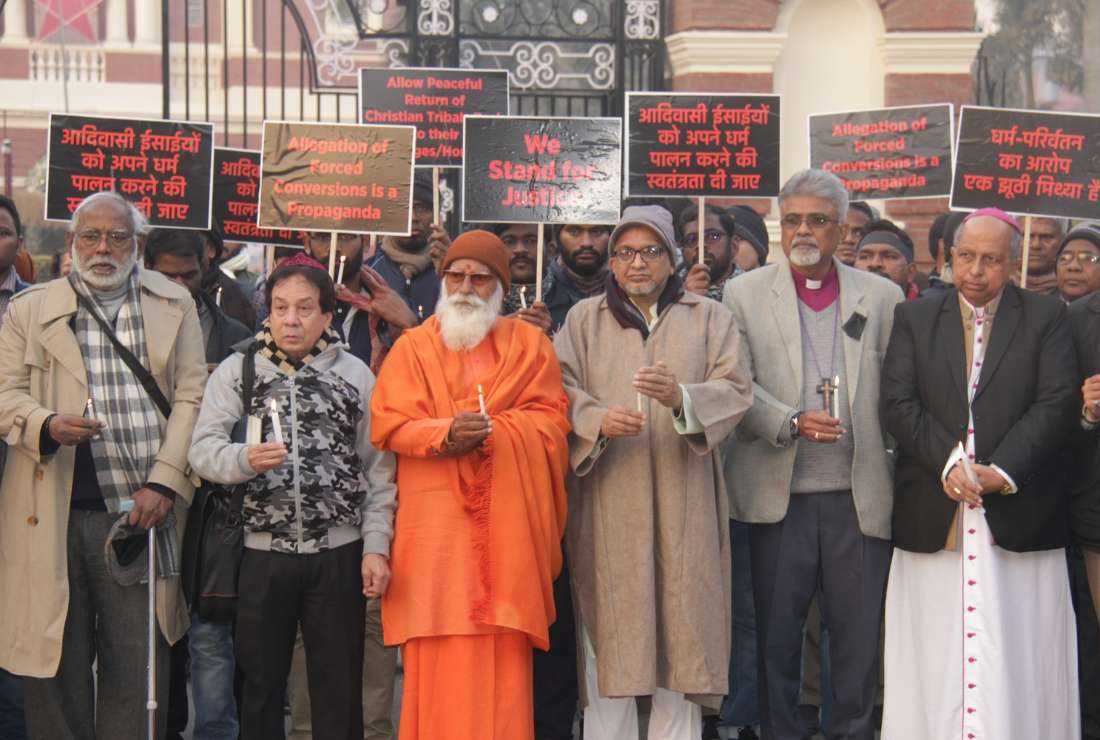 The inter-faith forum protest against attacks on tribal Christians in New Delhi on Jan. 8. (Photo supplied)

Some 300 people from different faith groups have joined for a prayer meeting on the side of a street in New Delhi to express solidarity with tribal Christians who were forced to flee their homes due to the violence in central India’s Chhattisgarh state.

Leaders from Hinduism, Islam, Buddhism, Judaism and Baháʼí faiths prayed with lighted candles on Jan. 8 asking the government to end violence against Christians for their refusal to recant their Christian faith.

The Delhi Archdiocese’s Commission for Ecumenism and Interfaith Dialogue organized the program in front of its Sacred Heart Cathedral drawing attention to the plight of tribal Christians in Chhattisgarh’s Narayanpur and Kondagaon districts, who were forced to flee their homes due to the violence.

Non-Christian tribal groups, backed by right-wing fringe elements, are reportedly insisting that tribal Christians give up their faith and return to their traditional animist practices.

Nearly 18 villages in Narayanpur and 15 in Kondagaon were attacked, according to a fact-finding team.

The team, which visited the affected districts, said more than 1,000 people have been displaced due to the attacks and social boycotts which started in the second week of December in tribal-dominated Chhattisgarh state.

Archbishop Anil Joseph Thomas Couto of Delhi extended his Church’s support to the victims and called on the federal and state governments to take immediate steps to bring the situation under control.

“The attack on tribal Christians in Chhattisgarh is an attack on Indian faith, culture and tradition,” said Hindu representative Goswami Sushil Maharaj, president of the Indian Parliament of Religions, while addressing the meeting.

He wanted the government to take appropriate action to end the violence.

Mohammad Salim Engineer, secretary-general of the Jamaat-e-Islami Hind, said, “the people who attack other people in the name of religion do not belong to any religious groups.”

Tension reportedly continues between two tribal groups — the minority tribal Christian community and the non-Christian indigenous people — in the state.

Chhattisgarh witnessed the second-highest number of documented attacks on Christians in India in 2021 and is one of the many states that has implemented anti-conversion laws.

A local Christian leader told UCA News that tribal Christians are told that if they want to be Christians, they need to move out of the villages or continue facing attacks in the villages.

After a lull, violence again started on Jan. 2 when a mob of about 50 people barged into the Sacred Heart Church in Narayanpur and vandalized its altar, crucifix, and statues.

So far, 11 people have been arrested with police filing four separate cases.

Some three decades ago, Hindu groups initiated a nationwide campaign titled Ghar Vapsi  (returning home) aiming to reconvert Christians to the Hindu religion claiming Hinduism is the common home and original religion of all Indians.

Though Christians comprise less than 2 percent of Chhattisgarh's 30 million population, right-wing Hindu groups claim the actual number is much higher.