Indian Hindus call for Mother Teresa's award to be revoked 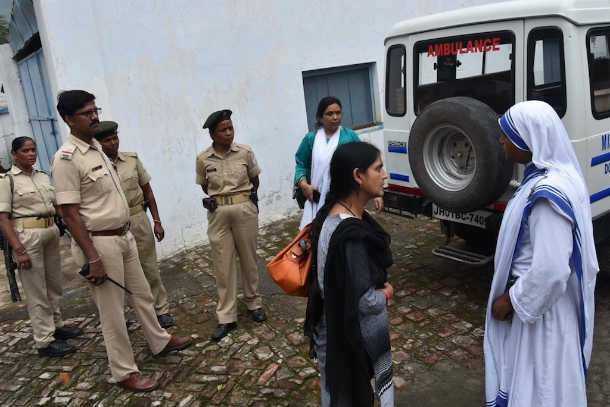 Police visit the premises of the Nirmal Hriday home run by Missionaries of Charity in Ranchi on July 4. (Photo by IANS)

Leaders of Hindu groups in India have launched a campaign against St. Teresa of Kolkata and her Missionaries of Charity congregation after a nun was arrested on a charge of conducting an illegal adoption in a case which Christian leaders say aims to tarnish the church's image.

The saint, commonly known as Mother Teresa, should be stripped of the highest civilian award — Bharat Ratna (jewel of India) — conferred on her in 1980 if the charges against the nun are proved to be true, said Rajiv Tuli, a leader of powerful Hindu group Rashtriya Swayamsevak Sangh (RSS).

"Indian citizens wouldn't want the honor of Bharat Ratna to be tainted," said Tuli, the Delhi chief of RSS, known as the engine room of Prime Minister Narendra Modi's government.

Tuli's demand was supported by parliamentarian Subramanian Swamy, leader of Modi's pro-Hindu Bharatiya Janata Party (BJP). "If you have got multiple examples of criminality by Mother Teresa, why should she be a person who is celebrated as a Nobel laureate?" he asked.

The Albania-born nun, who came to India at the age of 18 in 1928 as a Loretto nun, made India her home and founded the Missionaries of Charity in 1950 to serve the poorest of the poor. She was given the Nobel Peace Prize in 1979.

Father Denzil Fernandes, director of the Jesuit-run Indian Social Institute in New Delhi, told ucanews.com that the national and international honors given to Mother Teresa describe what kind of person she was.

He said those blaming Mother Teresa "could not stomach the good work the nuns are continuing to do. It is their agenda to target the church."

The campaign against Mother Teresa and her nuns started after police arrested a nun who ran a home for unwed mothers in Ranchi city of Jharkhand state on charges of conducting an illegal adoption on July 5.

The arrest came after a childless couple complained that a staff member at Nirmal Hriday home took money but failed to provide them with a child as promised.

Sister Mary Prema Pierick, superior general of the Missionaries of Charity, said in a July 17 statement that a staff member was entrusted to surrender a child to the government's Child Welfare Center. But she and the child's mother did not surrender the child and hid the fact from nuns, Sister Prema said.

Abraham Mathai, former vice-chairman of the Minorities Commission in Maharashtra state, told ucanews.com that "at the most, the nuns are guilty of naivety and overtrusting people" and media and police are "ridiculously and shamelessly" accusing them of conducting an illegal adoption.

A.C. Michael, a Christian lay leader, said the honors were given to Mother Teresa for her individual merit. "It is unfair to demand to take them away for the alleged wrongdoing of her nuns," he said.

Michael, a former member of the Minorities Commission of Delhi, said the issue is live in the media because accusing Mother Teresa and her nuns is always sensational.

Meanwhile, Bangladeshi religious and lay leaders have condemned an attack on Mother Teresa by a controversial Bangladesh-born India-based writer.

Taslima Nasreen, 55, tweeted on July 13 that selling babies by Missionaries of Charity nuns was nothing new. "Mother Teresa charity home sells babies, it is nothing new. Mother Teresa was involved with many illegal, inhumane, immoral, unethical, unprincipled, wicked, fraudulent, barbaric acts. Please don't try to protect criminals only because they are famous," she tweeted.

Her comments irked many in Bangladesh, with some taking to social media to protest.

"Everyone in the world knows about Mother Teresa and her works. Had she committed any crime, it would have come out in her lifetime. Her [Nasreen's] comment is unwarranted as she is a controversial figure. We would just bypass her statement," Bishop Gervas Rozario of Rajshahi, vice-president of the Catholic Bishops' Conference of Bangladesh, told ucanews.com.

Maolana Fariduddin Masoud, chariman of Bangladesh Jamiatul Ulema (Council of Clerics), said Nasreen's tweet was an awful attempt to put herself in the spotlight.

"I won't say Mother Teresa was completely flawless but she has done wonderful service to humanity. A blanket accusation against her and nuns of her congregation is biased and unacceptable," Masoud told ucanews.com. "There are attempts in India to establish a Hindu theocracy. Taslima is trying to go with the flow by discrediting well-known religious figures for political and vested interests."

Once known as an advocate of free thinking, women's rights and human rights, Nasreen plunged into controversy with her writings against religions, especially Islam. Her 1993 novel Lajja (Shame) about abuse of a Hindu family by Muslims gained popularity but also angered radical Muslims. Islamist threats forced her to migrate and live in Europe and America until 2004 before she settled in India in 2005.

Mother Teresa died of cardiac arrest at the congregation's mother house in Kolkata on Sept. 5, 1997, aged 87. St. Pope John Paul II beatified her in 2003 and Pope Francis canonized her in 2016 in the Vatican.