Hindu nationalists say 'no' to alliance with radical Buddhists

Rise of extremism a serious concern for religious minorities in Asia, warns activist 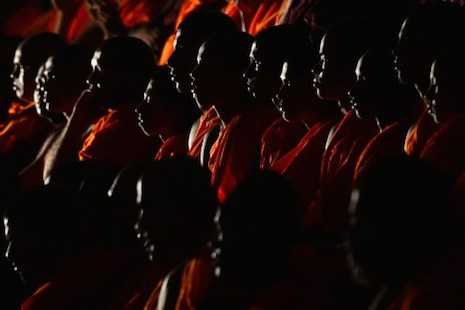 An Indian Hindu nationalist group said Wednesday that it has no intention of forming an alliance with a hardline Buddhist group in Sri Lanka.

Both groups are viewed as hostile toward minority Muslims in their respective countries.

But RSS spokesperson Ram Madhav told ucanews.com on Wednesday that he has "no knowledge of any such" initiative to form a partnership with Sri Lanka’s BBS.

"It seems to be a mischievous statement," he said, adding that in general the RSS does not enter into any international partnerships.

The BBS has been linked to a rise in attacks against Sri Lanka's minority Muslim and Christian population in the past two years, although it denies any involvement.

BBS General Secretary Galagodaatte Gnanasara Thero told ucanews.com Wednesday that in addition to its negotiations with the RSS, it was also in talks with Buddhist and civil society groups in India “to form an alliance to have a Buddhist-Hindu Peace Zone in Asia”.

He added: "We are hopeful of meeting India's Prime Minister Narendra Modi soon to discuss the idea."

Sri Lanka suffered its worst religious violence in decades this June when riots left four people dead in the coastal town of Aluthgama.

Jehan Perera, executive director of the National Peace Council of Sri Lanka, said the BBS’ vision of a peace zone “cannot be based on fear and aggression against other religions”.

Last month, the BBS established an alliance with the 969 movement, a radical Buddhist group known for fomenting hatred against Muslims in Myanmar.

Chris Lewa, director of the Arakan Project which seeks to draw attention to the plight of Myanmar's minority Rohingya ethnic group, said Wednesday that the BBS-969 partnership is “very worrying” for Myanmar as a whole.

Lewa said that for the Rohingya in particular, “this alliance and the Rakhine Action Plan revealed last week show that there will be no light at the end of the dark tunnel for them any time soon”.

“The rise of extremism in the region, whether from Buddhists or Islamists, is a matter of serious concern for the rights of religious minorities,” Lewa added.