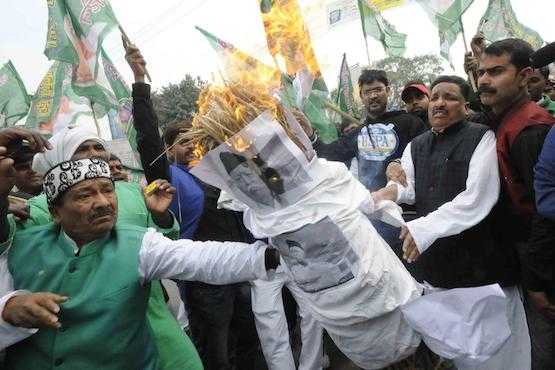 Political activists burn an effigy of Mohan Bhagwat on Feb. 13 in Patna, capital of Bihar state, protesting his claim that Hindu nationalist group Rashtriya Swayamsevak Sangh (RSS) can get its members war-ready in three days. (Photo by IANS)

The claim of India's most hard-line Hindu group that it can get members battle-ready in three days has drawn criticism over the legitimacy of the government allowing a private army in the country.

Mohan Bhagwat, head of the Hindu nationalist Rashtriya Swayamsevak Sangh (RSS), said in a public speech on Feb. 12 that his organization could raise an army out of its members in three days to fight for the country if needed.

The army needs "six or seven months to prepare" for a war but "if asked, we can do it in three days ... this is what we are capable of," Bhagwat told a meeting of RSS members in eastern Bihar state.

He also said his was not "a military organization. But we have discipline like the military. If the country needs it and the constitution permits," its members are ready even to sacrifice their lives on the border.

Critics of the statement included Rahul Gandhi, president of the Congress party, arch rival to the ruling pro-Hindu Bharatiya Janata Party (BJP). The RSS is considered the engine room that runs all Hindu nationalist groups, including the BJP.

Bhagwat's claim was "an insult to every Indian," Gandhi said, adding that the RSS chief's remarks disrespected army personnel who have died defending India. "It is an insult to our flag because it insults every soldier who ever saluted it," he said.

Panini Anand, a political commentator based in New Delhi, said the question is not whether Bhagwat can actually mobilize an army in three days. "But we need to ask why exactly has the RSS been training an army?"

"In a democracy, is any organization or ideological group permitted to raise an army? Who gave them permission to impart military training, and can such a militia ever be in the country's best interests?" Anand asked.

He said it was unfortunate that opposition parties failed to recognize the issue behind Bhagwat's words. "It has limited itself to the flag and the army, while the scale of the war is far greater," Anand said.

Hindu groups are already under criticism for violently attacking religious minorities like Christians and Muslims in their push to make India a Hindu theocratic nation.

Several Muslims have been lynched or attacked in the past year over issues connected with protection of the cow, a revered animal in Hinduism. Christian groups have recorded at least 300 cases of attacks against their people in the past year.

The RSS claim vindicates the fear of religious minorities, said Saaqib Ali, a Muslim student based in New Delhi. He said the RSS has been openly describing Muslims and Christians as "foreigners" in India as it moves ahead with the idea of a Hindu nation.

Stressing that the ruling BJP draws its mass strength from the network and ideology of the RSS, Ali said: "India at present is ruled by the RSS and if such a statement is coming from its chief, it is aimed to make Muslims and Christians fret for their survival."

Minister for Home Affairs Kiren Rijiju defended Bhagwat's remarks. He said the RSS chief only said it takes six or seven months for a person to become a trained soldier and, if the constitution permits, RSS cadres have the ability to contribute.

"During an emergency, every Indian must volunteer to stand with the defense forces," he added.

According to  research by U.S.-based Alliance for Justice & Accountability, RSS leaders have openly touted their aim to make India a Hindu nation where non-Hindus would be "second class citizens" with limited freedom and rights.

"Most anti-minority campaigns over the decades can be directly or indirectly traced to the RSS and its various affiliates, or to a few other organizations ideologically affiliated to it," the research claimed.

Christian and Muslim leaders say the BJP's landslide in the 2014 national election emboldened Hindu groups, who took it as a mandate to work for their nationalist goals.

With 966 million Hindus in a population of 1.2 billion Indians, Hindus are a huge majority but the country is also home to close to 80 million Muslims and 28 million Christians.