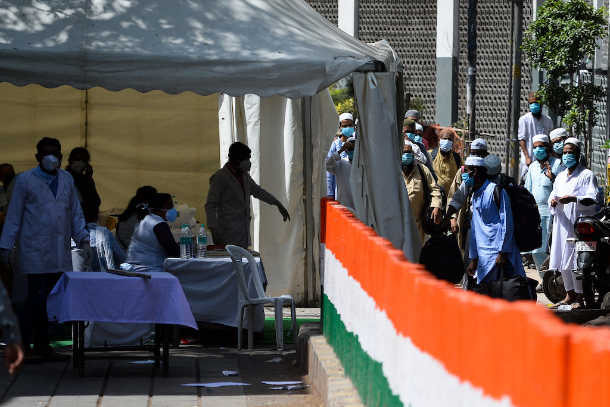 Men wearing protective face masks are checked by officials before boarding a special service bus taking them to a quarantine facility amid concerns about the spread of coronavirus in the Nizamuddin area of New Delhi on March 31. (Photo: AFP)

Hindu groups in India have accused a Muslim evangelical event of turning New Delhi into a hotbed of coronavirus infection, threatening to snowball the discussions into a Hindu-Muslim war of words.

Several Hindu groups have demanded the arrest and punishment of organizers of the mid-March conference in the Nizamuddin area after police last week moved hundreds to hospitals with symptoms of Covid-19.

The influential Vishwa Hindu Parishad (VHP) has described the Nizamuddin meet as a "corona factory" and demanded that Muslims "should come forward and close with immediate effect all the mosques in India that are still open."

"A corona-infected deceased must be mandatorily cremated irrespective of religious affiliation to stop the spread of the infection," it said in a call to follow the Hindu custom of cremation instead of the Muslim tradition of burial.

The Hindu comments came after police on March 31 completed evacuation of more than 2,000 Muslim preachers from the headquarters of Islamic missionary group Tablighi Jamaat in Nizamuddin. An estimated 40 percent of them now show signs of Covid-19.

The March 13-15 conference reportedly had up to 8,000 participants from all over India. Thousands had traveled back to their homes, while at least 10 have since died of the infection.

Some 2,040 foreigners from 67 countries, including nine from China, also attended the conference, ignoring warnings against gathering and directions of 14 days of mandatory self-quarantine, a media report said quoting police sources.

Authorities fear the conference participants and those who came in contact with them are potential carriers of coronavirus. Their free movement in society could cause infection to millions.

Government sources told UCA News on April 1 that police across the country had launched a search for Tablighi-linked suspects. At least 6,000 participants have been reportedly identified for quarantining.

Syed Ghayorul Hasan Rizvi, chief of the federal government's National Commission for Minorities, called for "strict action" against those responsible for holding the conference. He directed all 29 states to ensure strict compliance with lockdown measures, which includes shutting down madrasas, other Muslim educational institutes and all religious places.

Police officials told UCA News on April 1 that police took four days to vacate the conference place, largely because people were not convinced about the need for social distancing and leaving what they described as their rightful place.

Despite the persistence of high-ranking police officials, Maulana Saad, chief of Tablighi Jamaat's headquarters called Nizamuddin Markaz, had refused to move out of its Banglewali Masjid.

The Prime Minister's Office then intervened and asked national security adviser Ajit Doval to speak to Maulana Saad at 2am on March 29 to help him move him out of the masjid, said an official seeking anonymity.

Police also filed a criminal case against Maulana Saad and chief organizers of the event for violating government restrictions on gathering and directions in times of an epidemic.

However, the Islamic group in a statement said the crowding inside the building happened under "compelling circumstances." The "stranded visitors" who had attended the conference had to be accommodated because of a lack of transport after a 21-day lockdown was announced across India on March 24.

However, religious leaders across India have expressed dismay about police inaction and the irresponsible behavior of the Muslim group despite warnings about the viral pandemic.

Christian leader A.C. Michael sought to downplay the "characteristic anti-Muslim angle" on the issue and said: "Police, empowered with special powers, have failed in their responsibility. I would not like to blame a religion for a human error."

He added: "Sadly, at the moment we have people in power who like to show minorities, especially Muslims, in a bad light. Given a chance, they will not waste time to declare them terrorists."

Michael was apparently referring to Hindu groups that support the ruling Bharatiya Janata Party (BJP) of Prime Minister Narendra Modi. These groups aim to make India a nation of Hindus, ignoring the interests and rights of other religious groups such as Muslims and Christians.

Muslim leader Muhammad Arif, chairman of the Center for Harmony and Peace based in Varanasi town in Uttar Pradesh, said the Indian public and politicians are generally "callous" about public safety.

"BJP supporters led riots in Delhi in February despite the virus warning. When opposition leaders were warning about the danger of an impending pandemic, the central government was mocking them," he said.

The number of Covid-19 cases in India has increased to 2,032 with 58 deaths, according to Johns Hopkins University data on April 2.