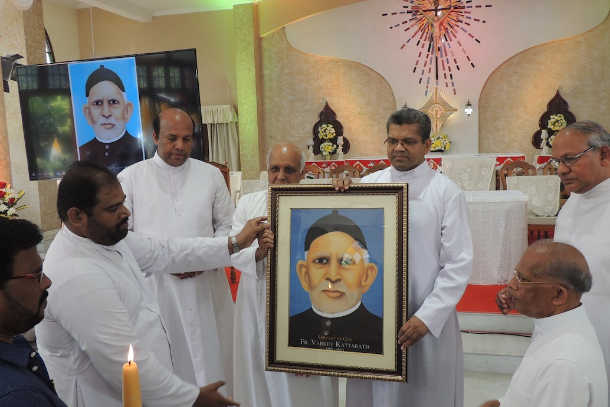 Officials of the Vincentian Congregation unveil a picture of their founder Father Varkey Kattarath at their Kerala headquarters on Feb. 5 after a ceremony in which the priest was placed on the path to sainthood. (Photo supplied)

Father Varkey Kattarath, who founded the Vincentian Congregation in southern India, has been declared a "Servant of God," placing him on the first step toward canonization.

Some 400 people and church leaders including Cardinal George Alencherry, the head of the Eastern-rite Syro-Malabar Catholic Church, attended a ceremony on Feb. 5 at the congregation’s headquarters in Kochi city of Kerala state. “It is a proud moment for all of us in the congregation,” said Father Alex Chalangady, general councilor of the congregation that was founded more than 110 years ago.

He said the ceremony was only the start of a long process. The first will be an investigation by the Church into the life of the priest. He will be given the title "Venerable" if the research proves that he lived Catholic life in a “heroic way.” Then follows the process of beatification and canonization. Both procedures have to prove miracles, extraordinary positive events, happening in the lives of people through the intercession of the prospective saint. “Our founder was considered a saint even when he was alive. People from all walks of life contacted him for curing blessings and other advice,” Father Chalangady told UCA News. “People flocked to him for prayers. Many people with chronic illness were miraculously healed, and farmers got relief from attacks of insects that destroyed crops.”  Father Kattarath, a native of Kerala, founded the congregation for men in 1904. It now it has 565 ordained priests and more than 200 seminarians.. The congregation has 87 houses in India and 11 countries overseas including Tanzania, Kenya and Uganda. In India, it works in 33 dioceses in 11 of India’s 29 states, engaged in education, social and pastoral work. The congregation’s headquarters in Ernakulam-Angamaly Archdiocese requested the canonization process. The archdiocese took it to the Syro-Malabar Synod, which sought and got permission from the Vatican in 2019. Father Kattarath (1851-1931) led a monastic life as a priest, said a statement from the congregation. Along with three other diocesan priests, he formed the congregation after Monsignor Louis Pazheparampil, the first vicar apostolic of Ernakulam, suggested the four start it modeled on the Congregation of the Mission, said the statement. In 1904, the four priests began their community life prescribed by the “common rules” of St. Vincent de Paul. However, the pioneers found it hard to lead a stable community life because of various reasons and dispersed in 1915, the statement said. It was later revived in 1927 when four other priests along with Father Kattarath were allowed to lead a religious life in the same house in a village in Thottakam Father Kattarath became its first professed member in 1927 but died in 1931, aged 80. Father Kattarath is among 40 other Indian Catholics in the process of canonization and listed as Servants of God. The country has least 11 Catholics named venerable and awaiting beatification. Seven others are beatified and on the last step of canonization.