Authorities in southern Kerala state wanted protest site at the Adani port project in Vizhinjam to be vacated by Sept. 21 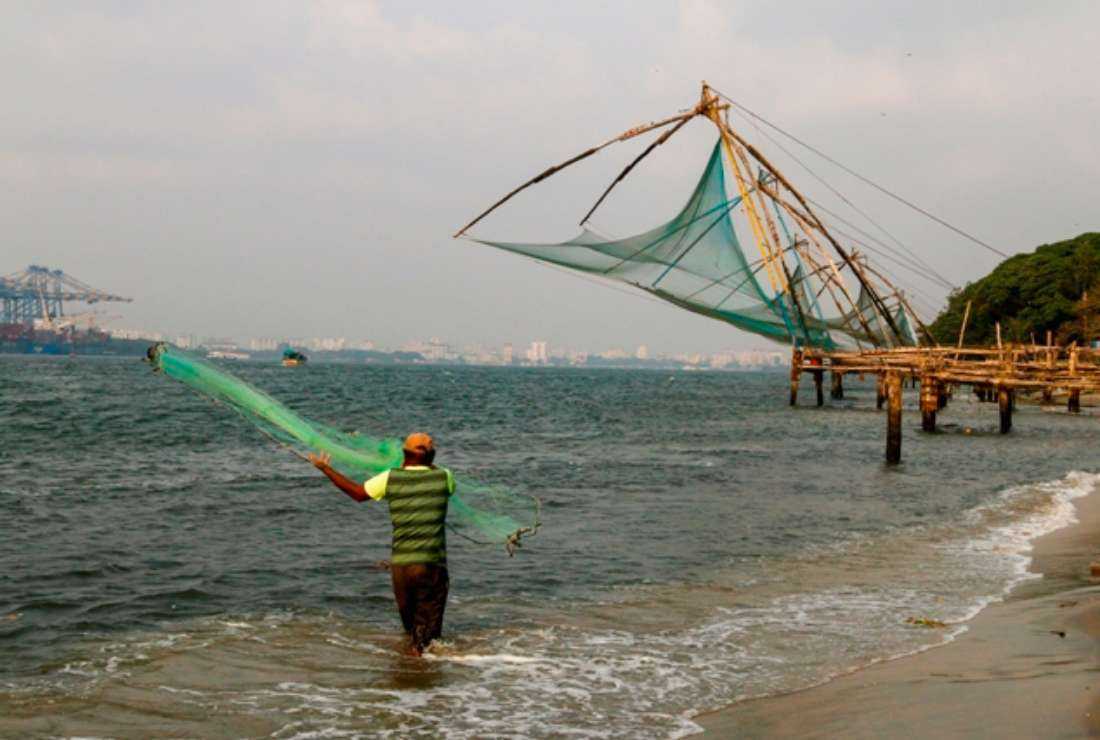 A fisherman casts his net on the shore of the Arabian Sea at Kochi in the southern Indian state of Kerala on March 18. (Photo: AFP)

Indian fishermen protesting against a mega port project in southern Kerala state have refused to vacate the site in defiance of an order issued by the district authorities.

“We are ordered to vacate the venue of protest, but we have not complied with it,” Father Michael Thomas said while adding that they will challenge the eviction order in the high court, which is already seized of the matter

The protest against the Adani port project at Vizhinjam coast near capital Thiruvananthapuram entered its 65th day on Sept. 22. The fishermen and their families under the leadership of bishops and priests of the Latin Archdiocese of Trivandrum launched the indefinite protest on July 20.

The Kerala High Court has ordered the state to ensure protection of the employees and laborers at the port construction site while the private firm moved a contempt petition alleging the state has yet to comply with the order.

Against this background, the district authorities ordered the protestors to remove their tent and vacate the site by Sept. 21 and present their case before an additional magistrate who signed the order.

“We do not understand the legal wisdom behind issuing such an eviction order as the matter is under consideration of the state’s top court,” Father Thomas told UCA News on Sept. 22.

The high court has not stopped the protests so how can the district authorities do it, he asked.

“We will file a reply to the additional magistrate who issued the order. Simultaneously, we will challenge it in the high court,” Father Thomas explained.

He said the protest was a matter of survival for thousands of fishermen and their families, most of them Catholic. It has been gathering good support from Catholics across the state as also from other communities such as Muslims and secular peoples and organizations.

The protestors want that the government should stop the port work and undertake a fresh study to assess the environmental impact of the project launched in 2015.

The government agreed to do a fresh study but refused to stop the construction work.

The protesting fishermen and their families also want rehabilitation and resettlement of those who lost houses and are now living inside warehouses.

Meanwhile, a US-based researcher Dr. Clement Lopez, who was formerly with the University of Kerala, in a recently released study, dismissed the protest saying the construction of Vizhinjam International Seaport is not causing erosion along the coastline of Thiruvananthapuram.

His study had analyzed the pattern of shoreline changes along the coastline from 1985 onwards and other pre-requisites to dissect the real causative factors of beach erosion but, “found no correlation between the port project and the erosion along certain stretches of the coastline,” Lopez said.

The fisherfolk, however, dismissed the report saying the researcher was a supporter of the private firm and wanted to derail their protest.