Political and social leaders in India addressing centenary celebrations of the nation's oldest lay Catholic organization have urged church members to stand up for constitutional democratic and secular values.

The chief minister of New Delhi, Arvind Kejriwal, stressed the importance of the All India Catholic Union (AICU) safeguarding the multireligious ethos of society.

Some "communal forces" seeking to divide the country had failed miserably because India maintained its diversity of faiths, castes and creeds, said Kejriwal on Aug. 24 at the culmination of the three-day gathering in the capital.

"We should all unite and work for our country which is facing difficult times," he said. "We all can do like what the AICU is doing because our unity is our strength."

Kejriwal, who previously was a volunteer with St. Teresa of Calcutta, said he continues to work with the Church in helping slum dwellers as well as on other projects.

In attendance at the celebrations, which included seminars, discussions and cultural programs, were three archbishops: Anil Couto of Delhi, Albert D’Souza of Agra and Peter Machado of Bangalore as well as Bishop Gerald Mathias of Lucknow.

Justice Kurian Joseph, a retired Supreme Court judge, told one seminar that India is a culturally and religiously diverse "union of people" as well as a union of states.

He suggested that the nation has been going backwards, not because the constitution is bad but because some leaders do not respect constitutional values. 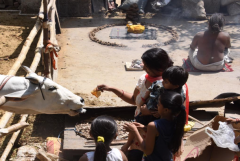 Arora, a panelist, said that on many occasions police failed to respond adequately and the entire machinery of government acted at the behest of the ruling BJP.

She called for police reforms as well as for more young Christians to become actively involved in the legal system and political leadership "so that we can raise our voices."

Another panelist, Sister Tresa Paul, who is a legal consultant at the Jesuit-run Indian Social Institute in New Delhi, said some people sought to create phobias in the name of religion.

The Holy Cross nun urged Christians to be united in the face of some Hindu groups using caste and religion to create divisions.

"We have to very watchful and careful," she said at the gathering, which was coordinated by AICU president Lancy D’Cunha and general secretary A. Chinnappan

The AICU, the official lay organization recognized by the Catholic Bishops' Conference of India, was founded in southern India in 1919 in what was then Madras, now called Chennai.