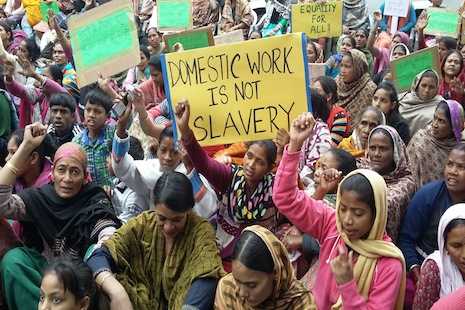 Female domestic workers protesting in New Delhi Dec. 9 demand minimum wages and job security and for the government to enact laws to safeguard their rights. (Photo by Ritu Sharma)

Church organizations in the Indian capital have helped organize women domestic workers to demand minimum wages and job security, which they say are necessary to lead a dignified life.

"We have been suffering for so long. There should be a law for us so that the employers do not pay us according to their wish and remove us from the job whenever they want," Sunita Yadav, a domestic worker, told ucanews.com.

Yadav was among the more than 200 women domestic workers from the national capital region holding placards and shouting slogans Dec. 9 in New Delhi.

She said that it is due to the hard work by domestic helpers like herself that employers were able to carry on with their busy schedules. "In return they do not even want to give us a little respect and proper wages," she said.

Chetnalaya, the social wing of the Delhi Archdiocese, was one of the organizers of the protest along with Caritas India, Nirmala Niketan and the National Domestic Workers Movement among others.

"The issue of exploitation of domestic workers is very serious in India with some made to work for 16-18 hours with no legal protection, no contact with their family and some even are subjected to physical, mental and sexual harassment," Anushika Thompson, advocacy and networking officer of Chetnalaya's domestic workers' forum, told ucanews.com.

Though nothing yet has been done by the government for domestic workers, organizations such as Chetnalaya have been able to sensitize women to stand up for their rights.

"We do not let any employer remove any domestic worker without notice in our area. We counsel workers and also talk to the employers if need be. This has made us secure in our jobs," Toppo told ucanews.com.

The convention, adopted in Geneva in 2011, requires each member country to fix a minimum wage for domestic workers, ensure security and decent living conditions.

In India, domestic workers are employed for cleaning, cooking, babysitting and other odd jobs in the house.

Millions of women work as domestic workers in India and make up one of the largest indirect contributors to the country's economy.

They remain voiceless because their work is considered unskilled and due to the absence of a law for them, they remain unprotected and unrecognized.

In 2010, the National Commission for Women came up with a draft law "Domestic Workers Welfare and Social Security Act" highlighting the exploitation but that is yet to be passed by Indian lawmakers.