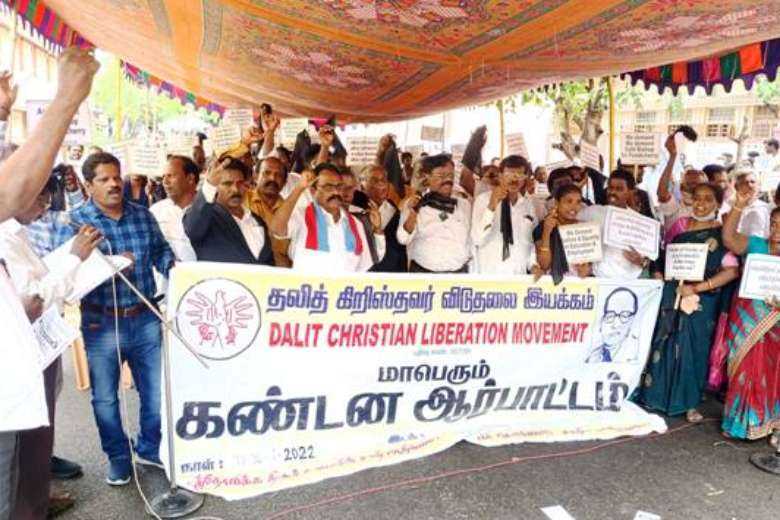 Indian Dalit Christians stage a protest near the Archbishop’s House in Pondicherry-Cuddalore on April 11. (Photo supplied)

Dalit Catholics have demanded the resignation of the Tamil Nadu Bishops’ Council chairman, Archbishop George Anthonysamy, holding him responsible for the recent appointment of a non-Dalit as archbishop of Pondicherry-Cuddalore.

The Dalit Christian Liberation Movement (DCLM) also demanded that the Apostolic Nunciature in India be banned if it continued to allow caste discrimination within the Catholic Church.

There have been a series of protests since the announcement and they will continue until the demand for revoking the appointment of Bishop Kalist is met, John added. The latest protest was held near the Archbishop's House on Cathedral Street in Puducherry on April 11.

“Our organization is deeply saddened and disappointed because this is the fifth instance in the history of Pondicherry-Cuddalore Archdiocese that a Dalit was denied the opportunity to serve as a bishop,” he said.

John warned that the DCLM will continue to organize Dalit Christians on the issue and will not allow the consecration of Bishop Kalist to be held on April 29.

“It is a discriminatory act as Dalit Christians are denied their right and have been protesting to stop this injustice,” the DCLM said while urging Pope Francis to stop a practice which was against India's constitution.

It further appealed to the Indian federal and provincial governments to intervene in the matter and end continued caste discrimination within the Catholic Church. Around 75 percent of Indian Christians came from Dalit backgrounds but only two out of 31 archbishops and 11 of the 180 bishops are Dalits, the DCLM claimed.

Only one among the 17 bishops in the Tamil Nadu-Pondicherry region is a Dalit, John added.

The Catholic Bishops’ Conference of India (CBCI) proclaims a policy for the empowerment of Dalits within the Church while affirming that "the term 'Dalit' does not indicate a caste identity. It is not only a matter of social and cultural category but a theological category as well.”

Government data shows some 201 million of India’s 1.3 billion people belong to this socially deprived category. Some 60 percent of India’s 25 million Christians hail from the disadvantaged Dalit and tribal groups.

SANDANASAMY JOSEPH RAJ
Feeling disturbed about this protest by Dalit Catholics. Such an internal conflict within the Catholic community is most unfortunate at this point of time when Christian Churches are faced with numerous challenges in the country like the growing hostility towards Christians, attacks on Christian institutions by radical groups, harassment of Christians, anti-conversion bill, and scandals within the Churches themselves.Immediate dialogue with the protesting Catholics is the best way forward.
Reply