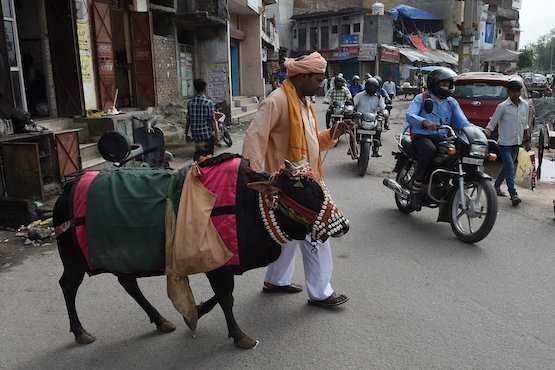 An Indian holy man walks with a cow as he begs for alms offered by Hindu devotees in New Delhi in August 2017. The cow is revered in Hindu society. (Photo by Prakash Singh/AFP)

An Indian court has jailed 11 people for life for lynching a Muslim man suspected of possessing beef in a landmark case that church leaders say will help to check increasing violence against religious minorities.

It is the first time a court has punished perpetrators of cow-related violence in the country, according to Persecution Relief director Shibu Thomas.

A fast-track court in Ramgarh district of eastern Jharkhand state on March 21 sentenced the men belonging to a group of Hindu cow vigilantes after finding them guilty of beating to death Muslim meat trader Asgar Ansari on June 29 last year.

The conviction "is a reassurance to all those victims of cow vigilantes and other anti-minority attackers that rule of law exists in the country and it will take its own course," said Thomas.

Thomas, whose organization documents anti-Christian violence and helps victims of persecution, said cow vigilantes have created havoc with their unchecked action to protect cows, which are revered by orthodox Hindus.

"This judgment is a landmark," he said. "It is not the judiciary alone. The police department also deserves special appreciation. The case could not have resulted in punishment without the impartial and genuine investigation and filing charges of the police."

He said a general feeling existed among many people that cow vigilantes operated with the tacit support of the state administration including police. "But this order has proved beyond doubt that if investigators work genuinely, there can be more convictions in similar cases," the bishop said.

Cow vigilantism gained widespread attention when Mohammad Akhlaq was lynched for allegedly possessing beef in his home in Dadri, Uttar Pradesh, in September 2015. Laboratory tests proved the meat was not beef.

Since the pro-Hindu Bharatiya Janata Party (BJP) came to power in 2014, such incidents have increased with no government official condemning them. Since May 2015, at least 12 people have been killed over the issue.

At least 25 Indians have been killed in cow-related violence since 2010 and 21 of them were Muslims, according to a recent report by IndiaSpend, a data website. At least 139 people were also injured in these attacks. More than half of the attacks were based on rumors, it said.

The attacks included mob lynching, murder and attempted murder, harassment, assault and gang rape. In two attacks, victims were chained, stripped and beaten, while in two others they were hanged.

Hindu attacks against Christians have also increased since the BJP came to power, with 736 reported attacks in 2017, up from 348 in 2016, said Persecution Relief.