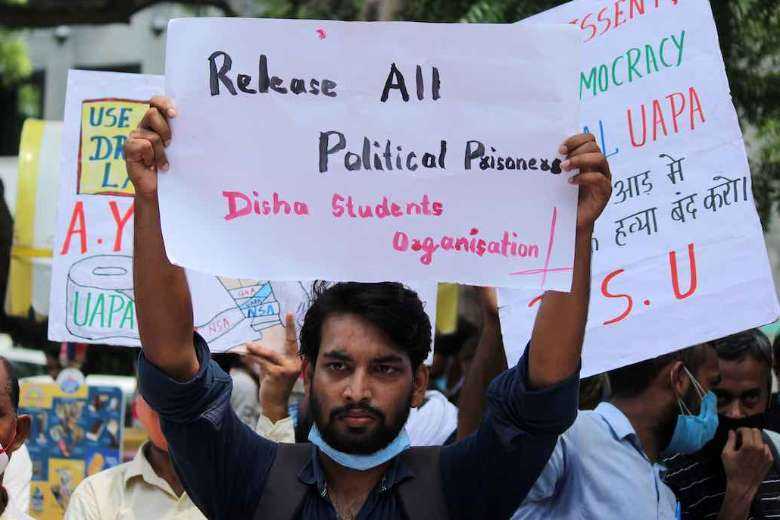 Bombay High Court has withdrawn its oral appreciation for Indian Jesuit Father Stan Swamy, who died under detention early this month, after strong opposition from a government pleader.

The court’s withdrawal came on July 23 when it gathered to decide on the nature of investigation needed to find out the circumstances that led to the priest's death on July 5. He was 84. Government pleader Anil Singh, who appeared on behalf of the National Investigation Agency (NIA), which arrested Father Swamy on charges of sedition and terrorism, opposed the judges’ earlier appreciative comments.

On July 19, Justices S.S. Shinde and N.J. Jamadar of the top court in Maharashtra state expressed admiration for the works of the Jesuit priest. They said they had “great respect” for his work while hearing his bail application, which was posthumously submitted to help decide on the course of investigation of the priest’s death in judicial custody. “He is such a wonderful person. The kind of service he has rendered to the society. We have great respect for his work. Legally, whatever is there against him is a different matter,” Justice Shinde said.

Our endeavor is always to be balanced. We have never made comments

“We don’t have time normally, but I saw [online] the funeral service [of Father Swamy]. It was very gracious,” he said.

They also said they did not anticipate his death. The judges also tried to counter criticism of the judicial system and the NIA, a federal anti-terror body, for repeatedly denying the priest’s bail applications on medical grounds. The government pleader said “any private comment or view ... Any personal comment coming from the judges ... in an investigation ... is being twisted by the media.” Justice Shinde responded by saying that their appreciation does not reflect on the legal issues. “Suppose you are hurt that I personally said something, I take those words back. Our endeavor is always to be balanced. We have never made comments ... But you see, Mr. Singh, we are also human beings and something suddenly happens like this," Justice Shinde said. Justice Shinde said he withdraw the statement and posted the case to be next heard on Aug. 4. The NIA arrested Father Swamy last October on charges of conspiring with outlawed Maoist rebels to topple the federal government of Prime Minister Narendra Modi. The priest was among 16 rights activists and social workers arrested on similar charges. Right activists and Father Swamy’s supporters say the police move was to silence criticism of the Modi government led by the pro-Hindu Bharatiya Janata Party (BJP). “Our Indian tradition is that we don’t speak ill of anyone after death,” said Father A. Santhanam, a Jesuit practicing lawyer who has closely monitored this case. “It is unfortunate that the government pleader opposed the appreciation for a man who spent his whole life for the welfare of the impoverished and exploited indigenous people,” the priest told UCA News on July 26. “This hostile attitude of the NIA basically led to the death of Father Swamy in judicial custody."

The priest also tested positive for Covid-19 a day after his hospitalization, but he recovered.

Father Swamy, suffering from an advanced stage of Parkinson’s disease and several other age-related ailments, spent almost eight months in jail. The priest sought bail on health grounds but an NIA court repeatedly denied and delayed it despite knowing about his deteriorating health, Father Santhanam said.

Father Swamy then appealed to Bombay High Court but amid continued opposition from the NIA he could not obtain bail for treatment. Father Santhanam appreciated the judges for their initiative that helped to admit Father Swamy to a Catholic-run hospital in Mumbai on May 28. The priest also tested positive for Covid-19 a day after his hospitalization, but he recovered. Father Swamy died from a cardiac arrest while undergoing treatment. His counsel Mihir Desai insisted on a judicial probe, rather than the general practice of a magisterial probe, into his death. Desai also pleaded with the court to allow Jesuit Father Frazer Mascarenhas, a former college principal, to join the inquiry as next of kin as he was the one who looked after Father Swamy during his hospitalization.