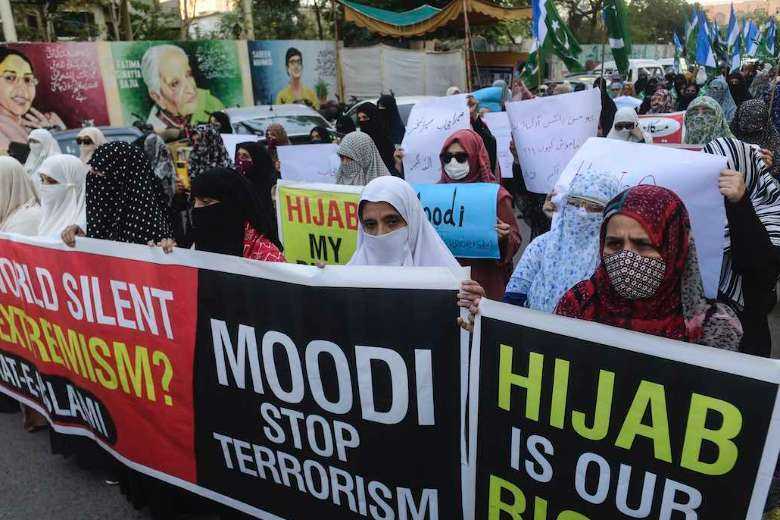 Supporters of the Islamic political party Jamaat-e-Islami protest against the hijab ban in Karnataka educational institutes in Karachi on Feb. 10. (Photo: AFP)

Ending weeks of suspense over a volatile sociopolitical situation in India, the top court in Karnataka state has upheld a ban issued by the state’s pro-Hindu party-run government on Muslim women wearing the hijab in educational institutions.

"Wearing of the Hijab by Muslim women does not form essential religious practice in the Islamic faith," ruled the southern state’s High Court on March 15.

Tension prevailed in various parts of Karnataka last month as parents and students staged sit-in demonstrations in front of various institutions after students wearing hijabs (head coverings) were not allowed inside.

Hindu groups opposed the hijab in Karnataka but the protest slowly spread across several states.

The issue took a political turn when leaders of the pro-Hindu Bharatiya Janata Party (BJP), which runs the federal government and several states including Karnataka, opposed Muslim women wearing the hijab in educational institutions.

The court ruling came after petitions challenging the Karnataka government's hijab ban for students. The court said no case had been made for invalidating the government order of Feb. 5.

“We are of the considered opinion that the prescription of school uniform is only a reasonable restriction constitutionally permissible which the students cannot object to," the court said.

A group of students in Karnataka had challenged the state ban on hijabs and contended there was no law prohibiting their use in educational institutions.

The petitioners had argued that the hijab is protected under religious freedoms granted by the Indian constitution and no college or state authority can ban it.

The Karnataka government told the court that there was no restriction on wearing the hijab in India except "reasonable restrictions" subject to institutional discipline.

The row started in January 2022 when students at a school in Karnataka’s Udupi area refused to remove hijabs despite requests from teachers. Five students then went to court.

Opposition parties including Congress have slammed the BJP government over the issue. But the latest court order said all the writ petitions "being devoid of merits are liable to be dismissed.”

"I welcome the court's decision. I appeal to everyone that the state and the country have to go forward, everyone has to maintain peace by accepting the order of the court"

Some postings went viral on social media claiming the ban on hijabs should be seen as a deliberate move to block Muslim girls’ education, a charge the BJP regime had dismissed.

India has witnessed Hindu-Muslim rivalry since it became a nation in 1947, resulting sometimes in fierce riots claiming thousands of lives.

Ever since the pro-Hindu BJP came to the center stage of Indian politics a decade ago, religious minorities such as Christians and Muslims have been accusing Hindu groups of ignoring their democratic rights in their push to establish Hindu hegemony in India.

The federal government of Prime Minister Narendra Modi has welcomed the court verdict.

"I welcome the court's decision. I appeal to everyone that the state and the country have to go forward, everyone has to maintain peace by accepting the order of the court," Minister of Parliamentary Affairs Pralhad Joshi told journalists in Delhi.

"The basic work of students is to study. So leaving all these rows aside, they should study and be united."