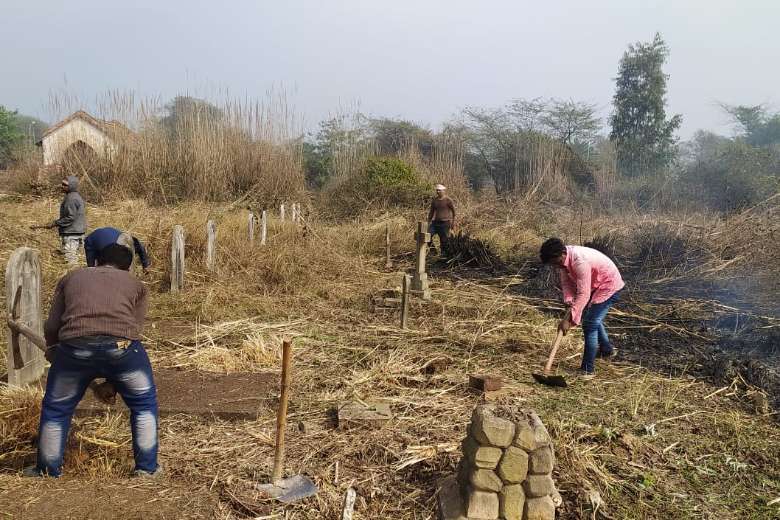 Christian volunteers and workers restore the tombs in Ambala Christian Cemetery in northern India after a court restored their burial rights. (Photo supplied)

A court in northern India has restored Christians' right to use a British-era cemetery after a self-styled bishop claimed ownership of the land and denied their burial rights.

Punjab and Haryana High Court dismissed the ownership claim of self-declared Bishop Shaukat Masih Bhatti of the Anglican Church over the Ambala Christian Cemetery, which functions under the British High Commission.

Bishop Bhatti, local church leaders said, managed to become the chair of the cemetery management committee a year ago and began to control the 176-year-old property in Ambala, a cantonment city.

The cemetery has been the only graveyard for the city’s 4,000 Christians of all denominations but Bishop Bhatti began to object to burials there, said Father Antony Chacko, assistant parish priest of the city’s Holy Redeemer Catholic Church of Simla-Chandigarh Diocese.

Father Chacko joined leaders of other denominations in a complaint to the Haryana state government seeking to restrain Bishop Bhatti from encroaching on the historically important 20-acre cemetery and possibly using portions of it for real estate development.

They also cited illegal structures in the historically important cemetery, which has more than 200,000 graves of Indians and British citizens including 66 graves of soldiers who died in World War I.

Since 1949, a committee representing the city’s Christians managed the cemetery under guidelines issued by the British High Commission.

The Indian government owns the cemetery's land but its occupancy rights and management are still with the British High Commission. The state declared it a protected monument in 1993 because of its historical importance but continued to allow Christians to bury their dead as Ambala cantonment area has no other Christian cemetery.

As the dispute continued, the local administration handed over cemetery management to the original cemetery committee on Jan. 12 after Bishop Bhatti was unable to prove his rights over the land and its management.

Bishop Bhatti moved the state's High Court challenging the decision but the court on Feb. 11 dismissed his claim and reprimanded him for hiding facts and attempting to mislead the court. The court also upheld the occupancy right of the British High Commission. The cemetery is on the list of the Commonwealth War Graves Commission (CWGC) under the British High Commission, which has a contract with the cemetery committee to maintain and upkeep the cemetery.

CWGC officials visited the cemetery on Feb. 8 and carried out repair and maintenance work on war graves. The local management committee also repaired the broken boundary walls, giving them a facelift.

“We feel so happy that now we can bury our dead without any hurdle,” Father Chacko told UCA News on Feb. 26. “Our people were so worried as they did not have any place for burying their dead. Now with the high court order, everything is settled.”

Bishop Bhatti did not react to the court order. However, he has the option of challenging the High Court order in the Supreme Court, the top court in India.