Bishop Franco Mulakkal, who denies attacking a nun, agrees to be interviewed by police in Kerala 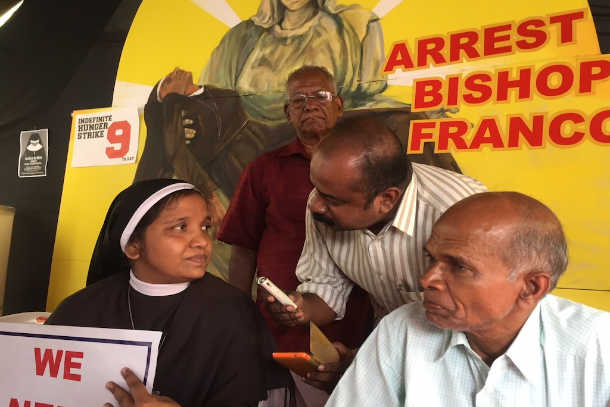 Sister Anupama of the Missionaries of Jesus talks with a media person at a protest demanding the arrest of Bishop Franco Mulakkal, who allegedly raped a nun from her congregation. She and three other nuns began their indefinite protest in Kochi, Kerala, on Sept. 8. (Photo by Christopher Joseph/ucanews.com)

The High Court in India's Kerala state on Sept. 18 postponed the anticipatory bail plea of Bishop Franco Mulakkal of Jalandhar, a day before he was due to appear before police accused of raping a Catholic nun.

The bishop applied for bail as four nuns from the alleged victim's congregation continued a public protest demanding his arrest for the non-bailable offense.

The court decision is no legal bar to arresting the accused, Bhanu said. However, if police follow usual procedure, they should wait for the next hearing. "There is no need for the police to march over the court," he said.

"The allegations made by the nun are concocted and cooked up only to take vengeance against action taken by me," said Bishop Mulakkal's bail application.

Police in Kerala are investigating a complaint filed by a 48-year-old nun who accused the bishop of raping her four years ago and abusing her 13 more times over the following two years at a house attached to her convent in Kerala.

Police questioned the bishop in mid-August in his northern Indian diocese, where the nun's congregation is based. But as the nuns' protest, which began on Sept. 8, gained momentum, police summoned him to appear before them on Sept. 19, raising speculation that the prelate might be arrested.

Bhanu said the rape complaint was registered on June 29. "The accused has not fled the country. He has cooperated with the police. There are no grounds to suspect that he will flee from the law at this stage" said Bhanu, explaining the reasons for not arresting the bishop.

"As far as I know, the bishop will appear before the police as scheduled and cooperate with the investigation."

Bishop Mulakkal, patron of the nun's Missionaries of Jesus congregation, temporarily entrusted his responsibilities to senior priests on Sept. 13. He has also written to the Vatican asking to be relieved from episcopal ministry so that he can concentrate on the case.

In a Sept. 16 press release, Father Peter Kavumpuram, Jalandhar Diocese's public relations officer, said the bishop had decided on his own to write to write to Pope Francis expressing his desire to step down from administration of the diocese. "He is confident that his request will be accepted," it said.

Bishop Mulakkal maintains that the nun cooked up the rape story when he began disciplinary action against her violation of religious vows including chastity and obedience.

"The conspicuous silence of more than four years by the nun is yet another indicator of the false nature of the allegations," his bail application said.

Save Our Sisters Action Council is spearheading the street protest near Kerala High Court. Coordinator Father Augustine Vattoli told ucanews.com that it will not end the protest until the bishop subjects himself to the law.

George Joseph of the Joint Christian Council said the protesting nuns were losing hope as witnesses, who are mostly from within the church, are turning hostile.

The church activist said most witnesses within the church might have been influenced by the bishop and church authorities. "There are no direct witnesses in the case. The only witnesses are those with whom the nun has confided her ordeal. They are not likely to stand by her," Joseph said.

He believes that the bishop is claiming innocence as he knows that witnesses will not speak against him. "This could also be the reason why church authorities have not come out against the bishop so far," Joseph said.