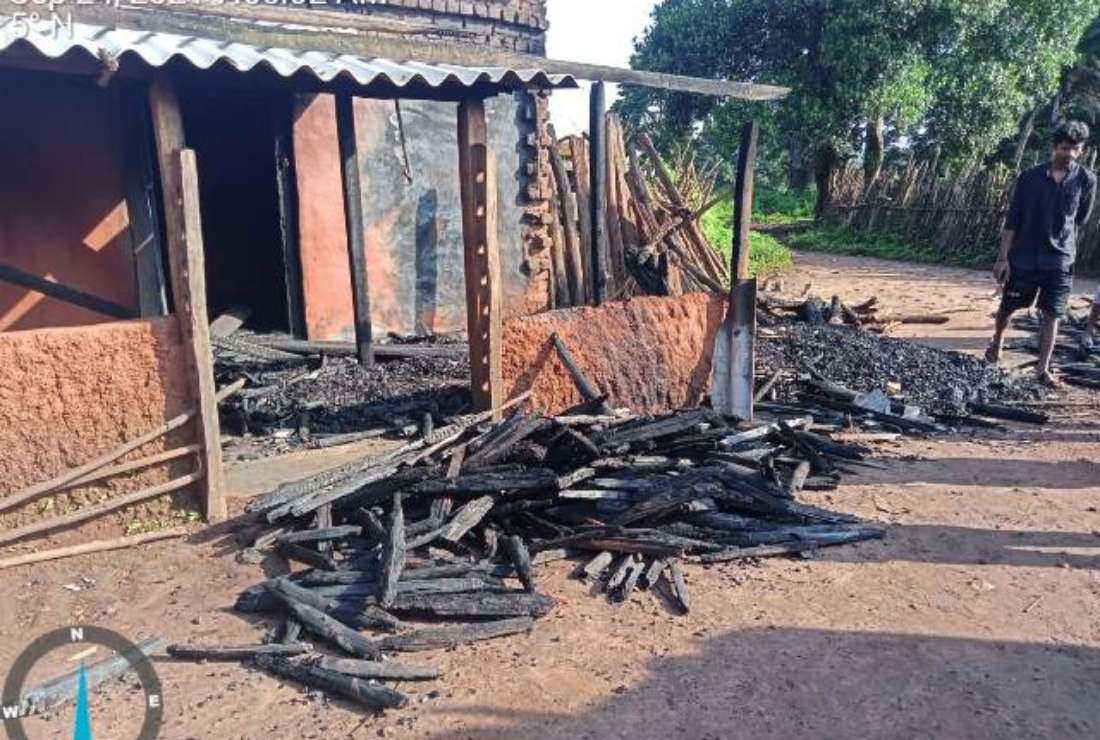 A Dalit Christian’s house was burnt by Hindu activists at Lodamila village in Kandhamal district of Odisha on Sept. 22, 2021. (Photo supplied)

Church leaders and rights activists have commended an Indian court for upholding the life imprisonment of Dara Singh and three others for the murder of Catholic priest Father Arul Doss in 1999.

Dara Singh, alias Ravindra Kumar Pal, 59,  along with accomplices had challenged their conviction by a trial court in 2007 in the Odisha state High Court.

Singh and his militant Hindu activist-supporters attained notoriety as the face of anti-Christian violence in eastern Odisha state with the murder of Australian missionary Graham Staines and his two young sons in 1999.

Singh appealed in the High Court that he had already served more than 21 years in jail and police custody for the Australian's killing and the punishment regarding the priest should be modified considering the years he has spent behind bars.

His accomplices in the murder of Father Doss, Chema Ho and Jadunath Mohanto were previously granted bail by the state High Court, while the Supreme Court allowed bail for Rajkishore Mohanto, another accomplice in the case.

But the two-judge bench of Chief Justice S Muralidhar and Justice Chittaranjan Dash affirmed the life term for Singh and the three others and dismissed their appeal on Sept 7.

Singh and his supporters, reportedly members of the Hindu organization Bajrang Dal which works to make India a Hindu nation, began a killing spree in 1999 with the murder of the missionary and his sons.

On Jan. 22, 1999, he led a mob that set fire to a car in which Staines and his two young sons were sleeping. All three were burned to death, with the mob surrounding them to prevent their attempts to escape from the fire.

On Aug. 26 of the same year, he attacked Rahaman, a petty Muslim trader with an axe after he refused to donate money demanded by Singh and his accomplices. The victim was later burned alive in his garment shop after Singh and the others looted it.

Father Doss, a 35-year-old priest in Balasore diocese, was killed on Sept. 2, 1999. He headed a predominantly Ho tribal parish based in Sarat village in Mayurbhanj district.

The priest was attacked by 15-20 men in Jambani, a remote village as he prepared to hold Mass for 15 local tribal families during a harvest festival.

Singh was arrested in January 2000 and is presently in a prison in Keonjhar district.

The High Court said there was no merit in his appeal.

“Keeping in view the nature of the assault, the brutality associated therewith and the circumstances of the crime where no prior enmity existed, and the victim was unarmed and defenseless, there is no case made for any leniency as far as the sentence is concerned,” the ruling reportedly said.

“It is common knowledge that Dara Singh has the backing of political rulers, otherwise he wouldn't have dared to commit such a heinous crime against humanity, Father Singh said.

The priest recalled how Father Doss was humiliated before being killed with a bow and arrow like they kill wild animals. The act reflected Singh’s hatred for Christians and their priests, he added

Father Dibakar Parichha, a Cuttack-Bhubaneswar archdiocesan official said: “We welcome the court verdict as Dara Singh is dangerous to society.”

After Singh’s convictions, Odisha continued to witness anti-Christian violence with the worst riots reported on Aug 23, 2008, after the murder of a prominent Hindu leader allegedly by left-wing Maoist insurgents.

The violence continued for seven weeks killing some 100 people, mostly Christians, rendering 56,000 homeless as 6,000 houses and 300 churches were destroyed.