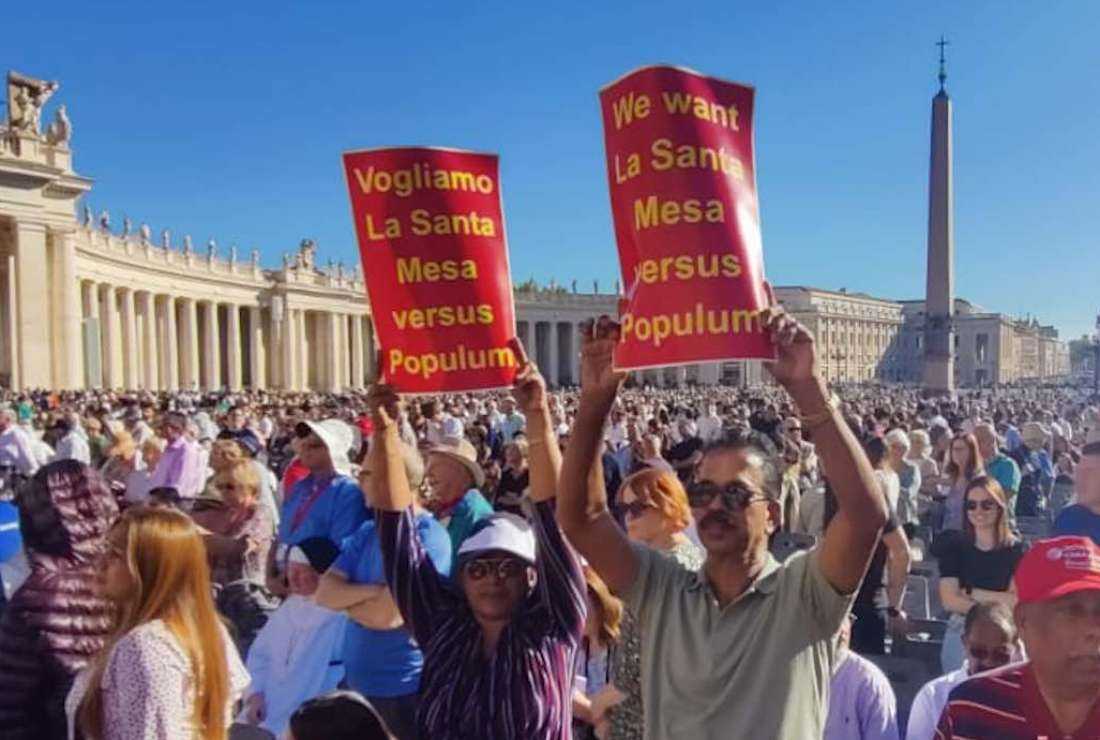 People from Eastern-rite Syro-Malabar Church, based in southern Kerala state in India, demonstrate with placards during the general audience of Pope Francis in the Vatican on Oct. 5 demanding to allow their priests to say Mass facing the people. (Photo: Supplied)

The decades-old liturgical dispute in India’s eastern rite Syro-Malabar Church reached the Vatican when a group of Catholics raised placards during the general audience of Pope Francis.

The close to 100 faithful including women from the Kerala-based Church on Oct. 5 tried to grab the pope’s attention by displaying placards demanding to allow their priests to say Mass facing the congregation, rather than facing the altar.

At least 48 of the protesters were on a pilgrimage to the Vatican while the rest were part of the Indian community in Italy.

The dispute took a dramatic turn last week when Archbishop Andrews Thazhath, the apostolic administrator of Ernakulam-Angamaly archdiocese, tried to impose the liturgical pattern approved by the bishops’ synod that requires priests to face the altar against the congregation during the Eucharistic prayer until Communion.

The group carried placards with slogans in support of “La santa Messa versus Populum” (the holy Mass facing the people) to the regular papal audience on Wednesday with tens of thousands of people from across the globe present.

“We are happy that the pope noticed our placards,” claimed Josemon Kammattil, one of the protestors, who is based in Italy.

Kammattil told UCA News that they stood at a strategic spot from where Pope returns to his residence after the public audience.

“As he (Pope) moved on while accepting the salutations of the people, he stood still for a second and noticed us holding the placards in silence,” Kammattil added.

He hoped the effort may place the truth before the Pope as the apostolic administrator seems to have misguided the authorities in the Vatican.

“We plan to continue our protests against the synod Mass on Wednesdays and Sundays strictly abiding by the local law,” Kammattil said.

He said close to 8,000 Catholics from the Ernakulam-Angamaly archdiocese are living and working in Italy and the majority among them were against the synod-approved Mass form.

The Ernakulam-Angamalyl archdiocese is the second largest Catholic diocese in India with a population of more than half a million and is also the seat of power of Cardinal George Alencherry, the head of the eastern rite Church.

The liturgical dispute in the Eastern-rite Church is nearly five decades old. While one group wanted to restore the ancient liturgy to its pristine purity, the other like Ernakulam-Angamali wanted liturgical renewal on modern lines

It was revived in August 2021 when the bishops’ synod decided to implement its 1999 decision for uniformity in Mass celebration across all 35 dioceses as part of an effort to bring in more unity among its members.

Barring the Ernakulam-Angamaly archdiocese all complied with the order after initial opposition from a few dioceses.

The dispute deepened on Sept. 30 when Archbishop Thazhath revoked the dispensation that so far allowed the priest of Ernakulam-Angamaly to say Mass facing people.

He also held meetings with the presbytery council and the curia on Sept. 30 and issued a circular asking the priests to follow the Synod-approved Mass with immediate effect for maintaining liturgical unity in the Church.

The news of the circular triggered protests from a section of laypeople. They threatened to block the entry of Archbishop Thazhath to Ernakulam-Angamaly and even demand his resignation.

This compelled Archbishop Thazhath to seek police protection and rush back to his archdiocese at Trichur in a taxi.

Leaders of priests and laypeople openly accuse Archbishop Thazhath and the synod officials of misleading the Vatican on an emotive issue like the Holy Mass.

They want the Vatican authorities to hold a plebiscite rather than continue with the falsehood fed to them by the administrator, claiming more than 99 percent of the people and priests in the archdiocese are against the adoption of the uniform Mass as approved by the bishops’ synod.

JOBY
Thts absolutely true , 99% of Laity and 98% priests wants to celebrate Versus Populum Holy Mass , we are true to the spirit of Great IInd Vatican council... Our Laity wants to see and experience Holy Mass actively Proposed Synod Mass Hides important parts (Anaphora) including Words of institutions from Laity... Our Synod is misleading the Vatican , we are begging Holy Father to intervene and allow our way of celebration of Holy Mass as a Liturgical variant... Like Zaire Use & Ambrosian rite
Reply

SAURIAN
So you want clown mass, guitar blessing, rock Mass? This is disappointing. But, hey, Catholics are done so who cares.

CHHOTEBHAI
How did Jesus celebrate the Last Supper? Facing or rather surrounded by the apostles. Even in St Peter's Rome the altar is in the centre, not away from the people. This turning one's back on the people is from the Old Testament with the High Priest alone entering the Holy of Holies. In his death Jesus rent the veil of the Temple. So all have access to the sacred mysteries.
Reply