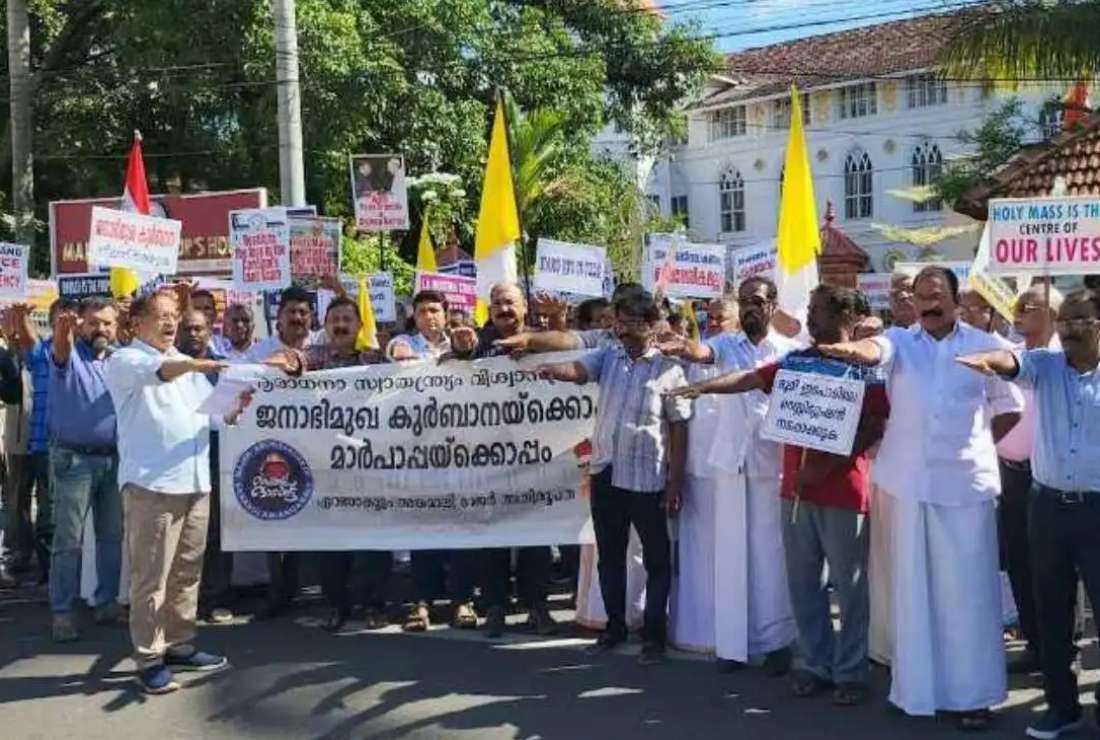 Lay people in Ernakulam-Angamly archdiocese in the southern Indian state of Kerala take a pledge to not allow Arhcbihsop Andrews Thazhath, the apostolic administrator, to enter the Archbishop’s House, on Oct. 16. (Photo supplied)

A Catholic archdiocese in the southern Indian state of Kerala could be headed toward snapping all ties with the Vatican over a decades-long liturgy dispute.

The priests and laity in Ernakulam-Angamaly archdiocese of the Eastern rite Syro-Malabar Church have boycotted the Vatican-appointed administrator Archbishop Andrews Thazhath. They also launched a blockade at the Archbishop’s House until their demand for a liturgy variant status to their traditional Mass, which involves the priest facing the people, is approved.

The latest provocation came after the administrator issued an order to the parish priest at St Mary’s Cathedral Basilica in Ernakulam to facilitate him at the Eucharistic celebration on Nov. 27, which is to be held in the synod-approved format, requiring the priest to face the altar against the congregation during the Eucharistic prayer to Communion.

Archbishop Thazhath further directed the rector of the Sacred Heart Minor Seminary in the archdiocese to begin offering the synod-approved Mass instead of the traditional one.

Around 100 members from different parishes in the archdiocese called on the parish priest and the rector asking them to ignore the communication from Archbishop Thazhath.

Both the priests reportedly accepted the request of the laity and pledged their full support to their struggle. The laity later announced the Vatican administrator will not be allowed to enter any Church institution until he withdraws the order.

“When more than 99 percent of priests and faithful are in favor of the traditional Mass why is it not accepted?” a priest who did not want to be named said on Nov. 22.

The priest also hinted that in case the administrator tried to have his way or initiate action against the parish priest and the rector, it may lead to the archdiocese “going its own way.”

The nearly five-decade-old row over the way the Mass is celebrated is mostly centered on the Ernakulam-Angamaly archdiocese headquartered in Kerala. It was revived after the synod of bishops of the Syro-Malabar Church issued a diktat in August last year that all its 35 dioceses should celebrate the Mass in a uniform way.

There was initial resistance in other dioceses, but they began following the synod-approved Mass in November last.

The resistance continued and took a turn for the worse in the Ernakulam-Angamaly archdiocese, which is the second-largest Catholic diocese in India and also the seat of power of Cardinal George Alencherry.

The archdiocese, which is home to around 10 percent of the close to 5 million Catholics in the Syro-Malabar Church, demanded the Vatican accept their traditional Mass as a liturgy variant but the administrator did not agree to it.

“We will not call off our battle until our demand is met,” said Father Sebastian Thaliyan, the convener of the Archdiocesan Protection Committee, which claims the support of some 500,000 faithful and 460 priests in the archdiocese.

These priests and laity accuse Archbishop Thazhath of playing “dirty politics” and "misleading the Vatican."

Many Catholics are concerned as Thazhath, besides being the archbishop of neighboring Trichur, is also the newly elected president of the Catholic Bishops’ Conference of India (CBCI), and wants the Vatican to step in immediately and settle the dispute.

“If the protest movement is allowed to continue for long, there is a possibility the archdiocese might declare itself as an independent Church,” opined a Christian leader who did not want to be named.

DAMIEN HOULIHAN
The Vatican should be more open ,and stop trying to change the way people pray
Reply