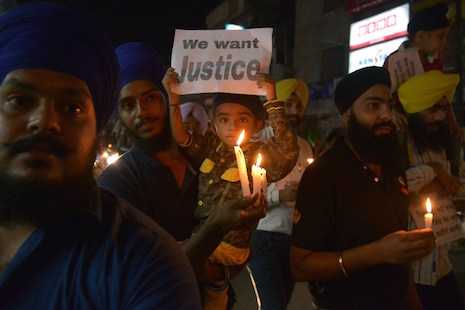 Indian Sikhs attend a candlelight march to protest against the alleged desecration of a Guru Granth Sahib, the holy book of Sikhs, in Amritsar on Oct. 21. (Photo by Narinder Nanu/AFP)

Church leaders in India's Punjab state are pleading for calm as angry protests spread across Sikhism's homeland following reports of a series of desecrations of the Sikh holy book.

"We have condemned the incidents and appealed for calm," Bishop Franco Mulakkal of Jalandhar, whose diocese covers most of the state in northern India, said Oct. 22.

By mid-October, hundreds of thousands of Sikhs, who are a majority in Punjab, blocked roads demanding the arrest of those responsible for desecrating the Guru Granth Sahib, Sikhism's sacred book.

Local media and police reports recorded at least five incidents of the book being destroyed. The trouble began Oct. 12 in Faridkot, with the discovery of torn pages of the Sikh holy book in Bargadi village. At least four more incidents of such desecration were recorded by Oct. 17.

The protests increased in size and intensity after an Oct. 14 incident, when police opened fire on protesters, killing two people.

As tensions escalated, paramilitary forces and the Punjab police tried to restore order by cordoning off sensitive areas in the affected districts of Amritsar, Jalandhar, Faridkot and Bathinda on Oct. 21.

"People are really angry and upset. They want their demands met as early as possible," said Father Peter Kavumpuram, the public relations officer of Jalandhar Diocese.

He said the Sikhs are "deeply spiritual people" and "very friendly" especially with Christians, who number 300,000 in the state with a population of 24 million people. "We have expressed solidarity with the grieving community," he told ucanews.com.

Indian media reported that at least six people linked to the desecrations remain in police custody.

Sikhism began in northern India's Punjab region in the 15th century. The Guru Granth Sahib, Sikhism's holy book of hymns, stresses equality, fraternity and service and is as significant to Sikhs as the Bible is for Christians.