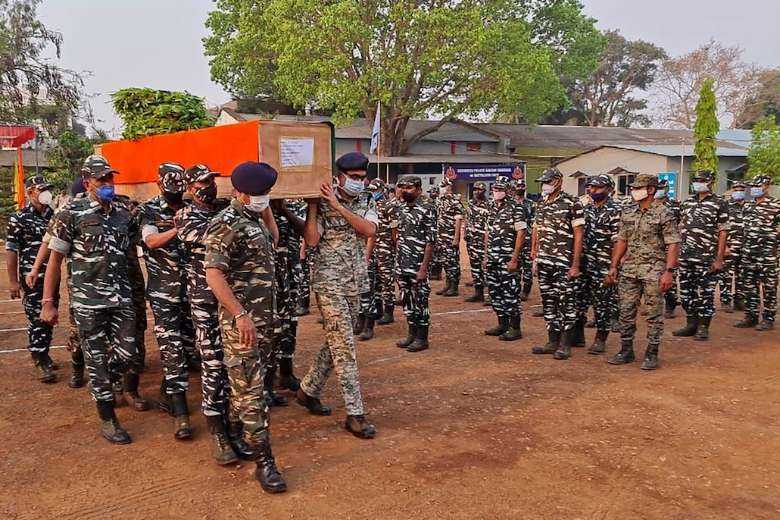 Indian security forces carry the coffin of a colleague at the Central Reserve Police Force's Jagdalpur camp in Bijapur district of Chhattisgarh state on April 4. He was killed in a gun battle with Maoist rebels which left 22 soldiers dead and 30 wounded. (Photo: AFP)

A Catholic leader in India has called for dialogue after outlawed Maoist rebels killed 22 security personnel in Chhattisgarh state.

Church officials said a Christian was among those killed in the four-hour gun battle on April 3, the deadliest attack in four years in the eastern state. It also left at least 30 soldiers injured.

The government has not immediately shared the details of the dead with the media.

“I am sad that our security personnel are killed in their call to duty. We condemn all forms of violence. This cannot be justified in the name of anything,” said Archbishop Victor Henry Thakur of Raipur, based in the capital of the violence-hit state.

Maoists, locally known as Naxals, have been engaged in an armed insurgency for more than four decades. Their leaders say the fight is for poor villagers and tribal people who have not benefited from India’s economic growth.

The attack happened in the forested areas of Bijapur and Sukma districts when security forces carried out a major search operation against the outlawed communist rebels, who run a parallel government in several districts.

Chhattisgarh’s Bastar region, where the killings occurred, is one of the worst Maoist-infested areas in the country. Besides civilians, close to 200 security personnel have been killed in the region since 2010, according to reports.

Archbishop Thakur told UCA News on April 5 that the rebels should hold dialogue with the government and end the violence.

“We can settle any dispute or disagreement through dialogue and violence has never been a solution to any problem,” he said.

Though the violence took place on April 3, its details and the death toll were released only on April 4.

“We pray for the departed souls and also for their families and near and dear ones to bear this loss.”

National leaders praised the sacrifice of the soldiers.

President Ram Nath Kovind said “the killing of the security personnel is a matter of deep anguish. I extend my condolences to the bereaved families. The nation shares their pain and will never forget this sacrifice."

Prime Minister Narendra Modi said his “thoughts are with the families of those martyred while fighting Maoists. The sacrifices of the brave martyrs will never be forgotten. May the injured recover at the earliest.”

Opposition Congress party leader Priyanka Gandhi saluted “the martyrdom of the brave soldiers” and said the “whole country is sad and angry at this incident.”

“The country will always remember the martyrdom of brave soldiers,” she added.