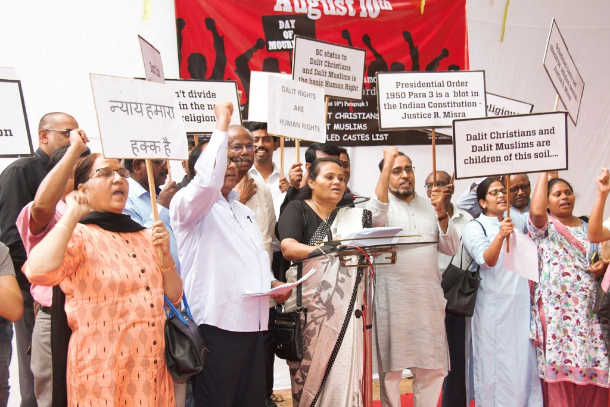 Dalit Christians and activists protest in New Delhi in August 2019 demanding the government give them the same rights enjoyed by Hindus. (Photo: Bijay Kumar Minj/UCA News)

Archbishop Antony Pappusamy of Madurai has denied allegations of casteism and discrimination against Dalits in the Indian Church.

But Archbishop Pappusamy, chairman of Tamil Nadu Bishops’ Council, issued a strong rebuttal of the claim.

“There are very rare cases in the dioceses in Tamil Nadu because it is our duty to safeguard the interests of our people including Dalit Christians, and we are doing it wholeheartedly,” he told UCA News.

“If someone has written a letter to the nuncio, it is his view, but we can’t blame all Tamil Nadu churches. The Church is doing its duty and in fact we try our best to give first preference to Dalit Christian children in our education institutes and in other fields.”

Dalit Christians are demanding scheduled caste status from the Indian government in a case pending at the Supreme Court.

“Dalit Christians don’t enjoy the liberty of Dalit Sikhs and Buddhists in the country, but they don’t enjoy liberty in the Church too. They are kept out of the hierarchy and considered untouchable,” Thomas, a Supreme Court lawyer, told UCA News.

“Several Dalit Christian groups from Tamil Nadu, Andhra Pradesh and other parts of the country in the past have complained to church authorities and have even written to the apostolic nunciature, but the outcome is nil.”

The Dalit Christian Liberation Movement sent a memorandum to the Vatican through the apostolic nunciature last September.

Thomas, in his letter dated July 18, said priests of Dalit origin who are theologically, morally, spiritually faithful to their priestly calling are neglected in the preliminary screening and final selection for bishoprics.

He says that it is against the canon law which says “they are also obliged to promote social justice and, mindful of the precept of the Lord, to assist the poor from their own resources.”

As the Holy See does not practice discrimination, many priests from the African and Afro-American communities have been elevated to bishops, archbishops and cardinals without racism or any exclusion.

But in Tamil Nadu and in the Indian scenario, Thomas claimed, qualified and deserving Dalit candidates are ignored due to the compulsions of caste-mindedness and are purposely neglected.

There is only one person from the Dalit community among 17 Catholic bishops in Tamil Nadu, Thomas said.

Dalit people claim that in some parishes of Tamil Nadu are given separate places to sit in churches, separate burial plots in cemeteries, while some parishes conduct separate feasts for Dalit Catholics and some prohibit Dalit Catholic processions from passing through their areas.

The struggle of Dalit Christians and Muslims in seeking scheduled caste status started after a 1950 presidential order removed privileges given to scheduled caste converts who were not Hindus.

Even though the privileges were restored to Sikhs (1956) and Buddhists (1990), Christians and Muslims have not been granted them and there seems to be little hope for them.

The word Dalit means "trampled upon" in Sanskrit and refers to all groups once considered untouchable and outside the four-tier Hindu caste system. Government data shows 201 million of India’s 1.2 billion people belong to this socially deprived group. Some 60 percent of India's 25 million Christians also come from Dalit and tribal origin.