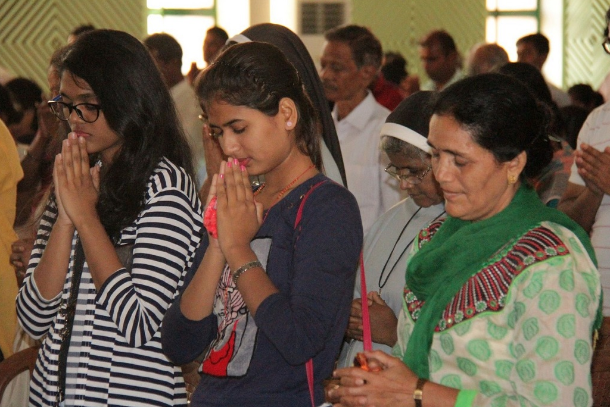 A Hindu organization in India's northern state of Uttar Pradesh has accused Christian missionaries of forced religious conversions, a charge that church leaders say is baseless.

“There is no truth to the allegation because during this period when some communal forces are trying to divide people in the name of religion and caste, anybody can claim such things,” Bishop Raphy Manjaly of Allahabad told UCA News.

“First of all, the Church in India does not promote or propagate religious conversion. If indeed it has happened, then let them prove it and we will see what we can do. But that will never happen because nobody has any proof.

“Reports of conversion are baseless and misleading but we have to very careful and watchful because in the name of Ghar Wapsi [reconversion] they use many tactics to woo poor people, especially the Dalits and tribals.” VHP claims the list was compiled on the basis of feedback received by activists. The organization says it will soon launch a massive exercise to win back Hindus who have taken up Christianity.

The head of the commission, Justice Aditya Nath Mittal, told the media that “existing legal provisions are not enough to check religious conversion and on this serious matter a new law is needed in the state.”

With nearly 200 million people, Uttar Pradesh is India’s most populous state. It is home to some 350,000 Christians, who form a minuscule 0.18 percent of the population. By comparison, Christians make up nearly 2.5 percent of India’s population.

Uttar Pradesh, like the national government, is run by the Bharatiya Janata Party (BJP), which has strong links to Rashtriya Swayamsevak Sangh (RSS), a militant Hindu nationalist organization.

Christian leaders say anti-conversion laws began to appear two decades after India's independence and they were aimed at checking the conversion of Hindus to Christianity or Islam. Hindu activists claim such conversions result in social divisions.

Despite such legislation, no Christian has been convicted of conversion but in the last decade several cases have been filed. Many of these arose in northern villages where Hindu groups argue that Christian mission work in education and health care is fraudulent or being carried out with the ultimate goal of conversion.

Such laws require a person officiating an act of conversion to inform state officials a month ahead of the ceremony. It also criminalizes acts of conversion using fraud, force or allurement, which are punishable with jail terms and fines.

"Checking religious conversion was one of the core issues that VHP has been working on for the past several years, ” said Ambrish Singh, a VHP leader.

Rev. Peter Baldev of the Church of North India said he had no idea of any religious conversions taking place anywhere in the country. “Attending a prayer meeting or preaching the Gospel does not amount to conversion," he said.

"It is a fact that ever since chief minister Yogi came to power in the state, Christians have faced innumerable accounts of violence. Pastors and members of the Church holding peaceful prayer services, including women and children, were beaten up mercilessly,” he said.

“Almost 100 churches have been shut down in the last two or three years. Pastors were picked up in the middle of the night as if they were terrorists so that they could not conduct Sunday services. This will further increase mob violence against Christians.”