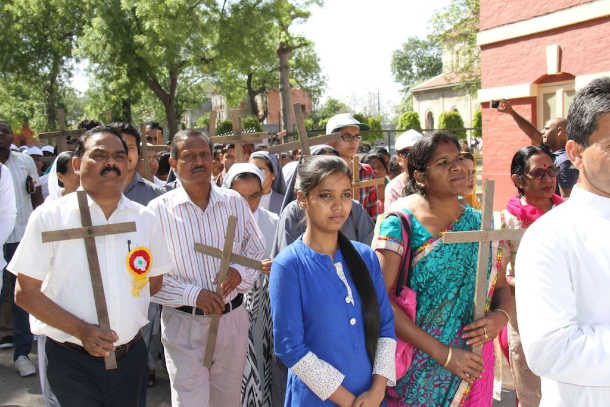 A Christian church in the eastern Indian state of Jharkhand was vandalized after missionaries were accused of religious conversion.

Local people destroyed a cross and damaged the under-construction Protestant church in Belagadia township of Dhanbad district on June 22.

The locals were joined by Indrajit Mahato, a Bharatiya Janata Party (BJP) member of Sindri Legislative Assembly, and party workers. Some leaders from Vishwa Hindu Parishad (VHP) joined them to demand action against missionaries accused of conversion.

“There was a commotion between the locals and some Christian leaders, but the area is now under control as there is a heavy police deployment,” Father Augustine Topno, former administrator of Jamshedpur Diocese, told UCA News.

Locals claimed conversions had been going on in Belagadia for a long time and more than two dozen families had been converted to Christianity.

Two young Christianity instructors, Kayna Bansal and Sushant Pradhan, arrived at the church during the commotion. Local people argued with them and asked them to break the cross, but they refused. Police detained the youths and are questioning them about conversion allegations.

BJP leader Mahato said people associated with Christian missionaries are giving various inducements to poor and innocent people, which is wrong. Action should be taken against such people, he demanded.

He also said missionary activities have increased with the formation of a new state government led by Hemant Soren.

Mahato said conversion is prohibited in Jharkhand and there is unrest about such activities.

The anti-conversion law passed in the state in 2017 rules that conversion by force or allurement provides for up to three years' imprisonment and a fine of 50,000 rupees (US$800).

If anyone wishes to convert, they need to inform the top district official of the reasons and the place of conversion or face prosecution. There are more severe punishments for using "force" to convert minors and women as well as members of tribal minorities and lower castes.