'We are terrorized and living in fear,' says a Catholic priest from Jhabua in Madhya Pradesh state 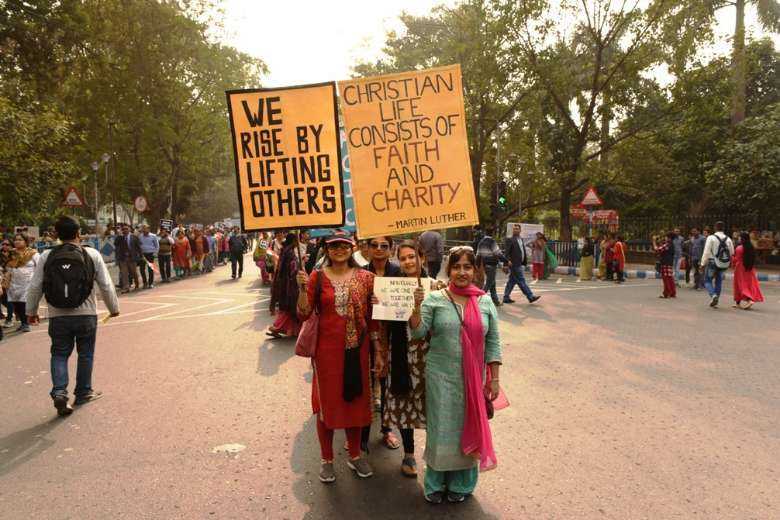 Christians march on the streets in Kolkata, India, on Jan. 20, 2020, during a nationwide protest against violation of their religious and social rights by groups who have been openly threatening minorities. (Photo: AFP)

Christian leaders in the central Indian state of Madhya Pradesh have appealed to India’s top constitutional authorities for protection from pro-Hindu nationalist groups.

The leaders belonging to different denominations, in a memorandum addressed to India’s President Ram Nath Kovind and Supreme Court Chief Justice N.V. Ramana among others, accused pro-Hindu organizations like Vishwa Hindu Parishad (VHP--world Hindu council) and its youth wing Bajrang Dal of infringing on their fundamental right to practice their faith.

“They [pro-Hindu nationalist groups] make false allegations of religious conversion against the priests and pastors in the community, carry false social media propaganda against us and register false police complaints against us,” the memorandum stated.

It further alleged the district and police authorities of siding with the nationalist groups to harass Christians while appealing to the constitutional authorities to step in to protect them and help lead their lives in peace as any other citizen of the country.

“We are terrorized and living in fear. We are being falsely projected as religious converters,” said Father Rocky Shah, one of the signatories to the memorandum and public relations officer of Jhabua Diocese.

He said Christians have served to educate and uplift the people of this country. They had also provided health care and other welfare services to the poor and needy.

“Unfortunately, their service to the nation was being misrepresented as a means to further religious conversions by pro-Hindu groups,” he told UCA News on Jan. 20.

He narrated several incidents of attacks on Christian pastors and the faithful during Sunday prayers across Madhya Pradesh, especially the tribal heartland of Jhabua, during 2021

Against this background, the priest said Christians in the state “were forced to approach the president and chief justice among other top constitutional authorities seeking their safety and security.”

In September 2021, VHP allegedly threatened to demolish churches in Jhabua district. Groups of men began visiting churches and prayer halls in villages and towns dubbing them as “illegal structures” and accusing the priests and local communities of faithful of “forcefully conducting religious conversions.”

The United Christian Forum, a human rights body, then appealed to Prime Minister Narendra Modi and Home Minister Amit Shah to ensure the safety of members of the minority religious community.

The forum also raised concerns about the local administration allegedly taking sides with those threatening Christians, who make up only about 4 percent of the district’s 1,025,048 people, as per the 2011 census.

FRANCIS LOBO
I am afraid of our own Bishops as they do not listen to our cry on misdeeds of a priest. https://chng.it/yKYwhTFD
Reply