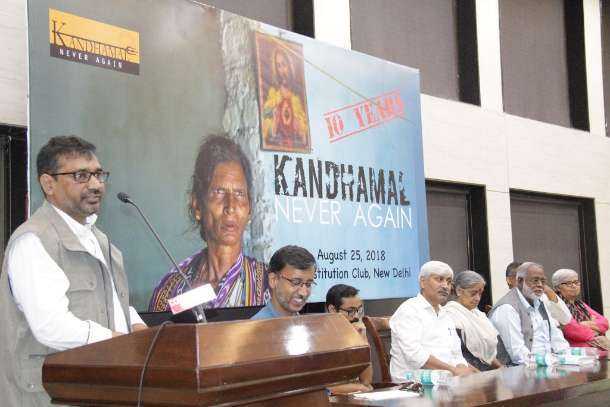 A Bharatiya Janata Party (BJP) leader has alleged that Australian missioner Graham Stuart Staines, who was murdered along with his two sons in Odisha in 1999, was involved in conversion activities among tribal people.

During his submission on the debate on the Foreign Contribution (Regulation) Amendment Bill, Satya Pal Singh told parliament that Staines’ organization, the Evangelist Missionary Society, was converting tribal people to Christianity.

“There was uproar over Graham Staines. What happened to him and his two children was wrong,” the BJP leader from the northern state of Uttar Pradesh said on Sept. 21.

“But agencies like the Central Bureau of Investigations, Odisha Crime Branch and the Justice D.P. Wadhwa Commission concluded that tribals were being converted there. It was the biggest reason that people turned against Staines.

“Besides converting tribals, Staines was also involved in sexually harassing tribal girls, which led to people turning against him and killing him.”

Suspected Hindu fanatics burned Staines and his sons Philip, 9, and Timothy, 7, inside their jeep on Jan. 23, 1999, in Odisha state’s Keonjhar district.

However, Singh’s remarks have saddened Christian leaders and communities in India.

Reverend Vijayesh Lal, general secretary of the Evangelical Fellowship of India (EFI), said the Christian community in India was deeply distressed by the remarks made by the minister.

The EFI, of which Staines was an associate, is writing to the speaker of the lower house to have the remarks expunged. “They injure the memory of a person who gave his best years in service of this nation, particularly its marginalized,” said a press statement signed by Lal.

They also go against the record as documented in parliamentary debates following the gruesome burning of the Australian leprosy worker and his young sons, the Sept. 22 press release said.

President K.R. Narayanan’s voice faltered as he described the murder as “a monumental aberration of time-tested tolerance and harmony. The killings belong to the world’s inventory of black deeds.”

Lal described Singh’s comments as outrageous and an abuse of parliamentary democracy.

“These remarks besmirch a deceased man’s outstanding life of social service, 21 years after his death, with hearsay and innuendo,” he said.

Founded in 1951, the EFI is a national alliance that includes 54 Protestant denominations as well as 200 charitable missionary agencies and organizations.

Hindu fanatic Dara Singh was convicted of leading the murderers of Staines and his sons and was sentenced to life in prison in 2003.

“The remark about Staines during a parliamentary discussion is condemnable. It goes to show the mindset of those in power and the political bosses need to take him to task for it,” Joseph Dias, founder of the Catholic Secular Forum, told UCA News.

“It is Indian tradition not to speak about the dead who cannot defend themselves. It is a matter of record that Staines and his two minor sons were martyrs.

“Statements like these are responsible for the persecution of Christians by Hindutva fundamentalists. It is a clearly inciting violence against the community.

“If the minister does not apologize or is not warned, it will send a bad signal to the world community and tarnish India's image among nations.”