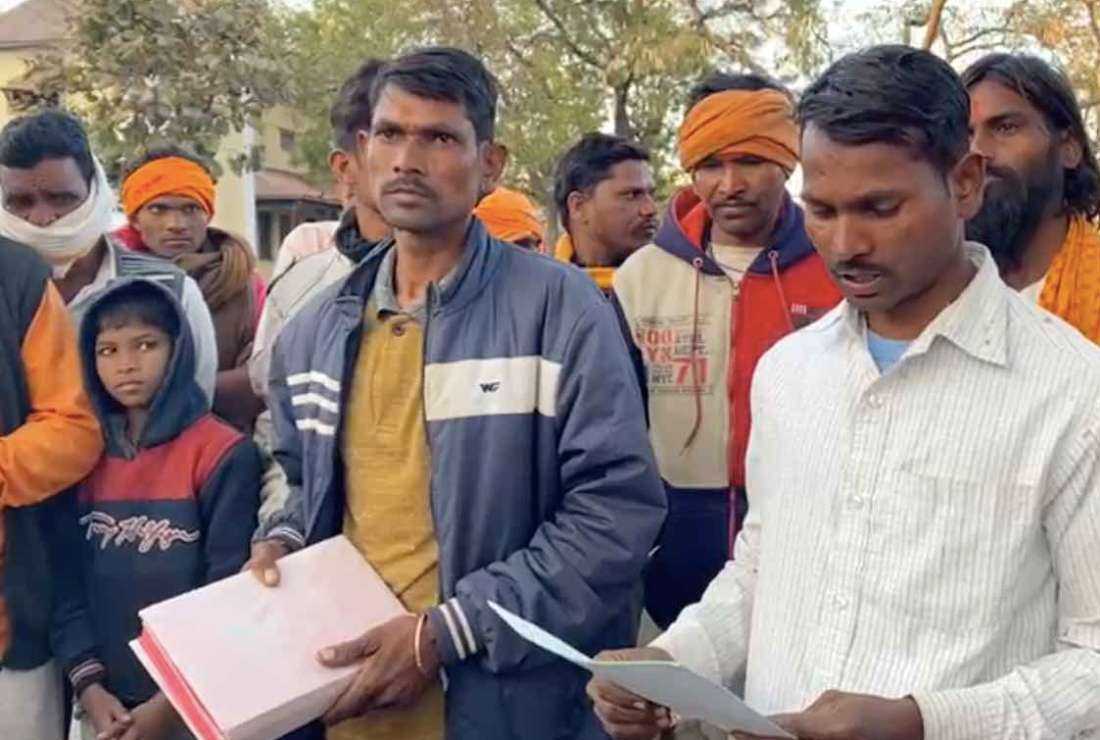 A person reads out the police complaint, which accused Father Joseph Amuthakani Jhabua diocese in central India of distributing the Bible in his attempt to convert Hindus. A person next to him holds the Missal (order of the Mass) they took from the priest's vehicle as evidence of Bible distribution. The priest was arrested on Jan. 18 but was released after ten hours. (Photo: supplied)

Indian police released a Catholic priest after some 1,000 Christians of various denominations rallied behind him in a show of solidarity as Christians across the globe began the week-long Unity Octave to pray for ecumenical unity.

Father Joseph Amuthakani of the Jhabua diocese was released ten hours after he was arrested in the central state of Madhya Pradesh on Jan. 18. He was illegally detained following the allegation that he attempted to convert a person fraudulently, violating a state law that criminalizes all conversions without informing the state.

“I am touched by the people’s love,” Father Amuthakani told UCA News on Jan. 19.

The 49-year-old priest said he was arrested from a sub-station of the parish, where he went to celebrate Mass.

The arrest was based on the false complaint of a Hindu man, who said the priest gathered gullible villagers in a house for Mass. At the gathering, the priest distributed Bible and other Christian literature and asked the people to abandon their Hindu faith and become Christians.

The youth also produced a copy of the Missal (order of the Mass) he had taken from the priest’s vehicle, as evidence terming it as Bible.

“Police officials understood it as a fake case. But still, under pressure from their top officials, I was kept in custody until 8 pm,” Father Amuthakani said.

The priest was released from the police station after more than 1,000 Christians gathered at Thandla police station in the Jhabua district, demanding his release.

“We all reached the police station for the rescue of the priest,” Gulla Dhamore, a Protestant Christian told UCA News on Jan.19.

Similarly “people from other denominations apart from Catholics also reached the police station to support the priest," he added.

“What we need is this unity. When in trouble, we should all stand together,” the middle-aged man said.

“We Christians need to be united in everything, although there is some difference in the way we worship our God,” he asserted.

The people carried Father Amuthakani on their shoulders from the police station in a procession and took him to a nearby Church. They also offered special prayers before departing for their homes.

Father Amuthakani termed the incident “the best example of Christian unity” that needs to be cherished across India, where Christians face increased persecution.

Christians across the world observe Jan. 18-25 as Christian Unity with special prayers during the week for fostering unity among various denominations.

Father Rocky Shah, the public relations officer of the Jhabua diocese saw the incident as a “God-given opportunity to bring us (various denominations) together.”

“It was very heart-warming to see followers of Christ coming together in support of a Catholic priest,” Father Shah told UCA News on Jan. 19.

“This kind of Christian unity is a must to protect us from such well-orchestrated traps against us,” he added.

The priest said right-wing Hindu groups have now started to lodge fake complaints against priests and pastors working in the district.

“They set the stage prior and lodge fake complaints of religious conversion against us,” he said.

Auxiliary Bishop Paul Muniya of the Protestant Shalom Church in Jhabua was charged with violating the provisions of the state’s anti-conversion law on Jan. 11.

The prelate, however, was not arrested after he appeared before the police and certified that he never visited the place where he was alleged to have indulged in illegal religious conversion.

But the case still remains against him.

“That’s what is happening in our district,” Father Shah laments.

Earlier, right-wing groups had openly threatened to demolish churches in the district alleging that they were all constructed illegally.

Hindu groups continue to file complaints accusing priests, pastors and other Christian leaders of violating the state’s stringent anti-conversion law that criminalizes conversion attempts with jail terms. The law stipulates that the district magistrates should be informed before changing religion.

JOHN MASCARENHAS
if a false complaint is made, is there no the law to punish the person who made the false complaint? is this justice? are we living in gunda raj? why should innocent people be intimidated by gundas and their political godfathers (who pretend they did not hear or see the news nor they have not supported) in government???
Reply