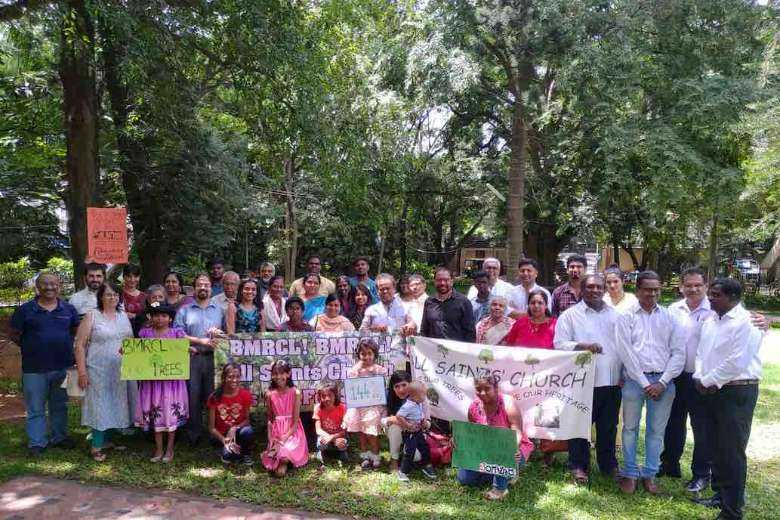 Members of the congregation of All Saints Church at a peaceful protest against the acquisition of its land in Bangalore in the southern Indian state of Karnataka in December 2019. (Photo: supplied)

A heritage church campus housing a school for the mentally challenged was saved from being acquired for a modern rail station after a three-year battle with authorities in the southern Indian state of Karnataka.

The 152-year-old All Saints Church, belonging to the Church of South India (CSI) on Hosur road in the state capital of Bengaluru (formerly Bangalore), faced the prospect of losing over 4,500 square meters of land to an underground metro rail project undertaken by the Bengaluru Metro Railway Corporation Limited (BMRCL). Besides the buildings, the land also has several aged trees.

“We came to know of the demand of the BMRCL only after officials made certain demarcations on our Church property in August 2018,” says Ronald Fernandez, secretary of the congregation.

Fernandez told UCA News on May 16 how they pleaded with officials not to demolish a portion of the heritage Church and the school for the mentally challenged, besides cutting more than 100 trees that were centuries-old.

It took three years of prayers, peaceful protests and sustained negotiations with the help of local non-government organizations like Environment Support Group (ESG) and Heritage Beku that the authorities finally conceded to acquiring 287 square meters of land temporarily in addition to the 166 square meters it had already taken permanently.

Seven trees would be cut instead of more than 100 and the rial officials have agreed to translocate maximum trees instead of felling them.

The church is a living heritage of Bangalore, said ESG on its website.

“It is an architectural marvel and is surrounded by lush greenery constituted of rich biodiversity and trees, some of which are almost 200 years old. Over 1000 families celebrate mass every week on this campus as they have been doing so for generations,” it added.

The church campus is an appropriate candidate for being declared as a ‘Biodiversity Heritage Site,’ ESG said.

The ESG along with the church congregation and activists studied in detail the project report and other documents related to it.

“To our surprise, we found that our land was not really required for the project and it emboldened us to fight our case strongly in all possible forums,” Fernandez said.

The tie-up with the NGOs helped the congregation to get the attention of the European Investment Bank, which was funding the rial project, in 2019. Soon two senior officials flew in to investigate the issue.

Fernandez also lauded the proactive role played by Anjum Parvez, the managing director of BMRCL, to negotiate an amicable settlement.

“We are happy that our Church is safe, school is safe, trees are safe and obviously, our environment is also safe,” he exclaimed.

Reverend Theodore William, the priest of the Church, told UCA News that “peaceful protests combined with prayers and dialogues saved the Church and its properties.”

“We are not against the development or progress of the nation, but we're fighting for a genuine cause,” he added.