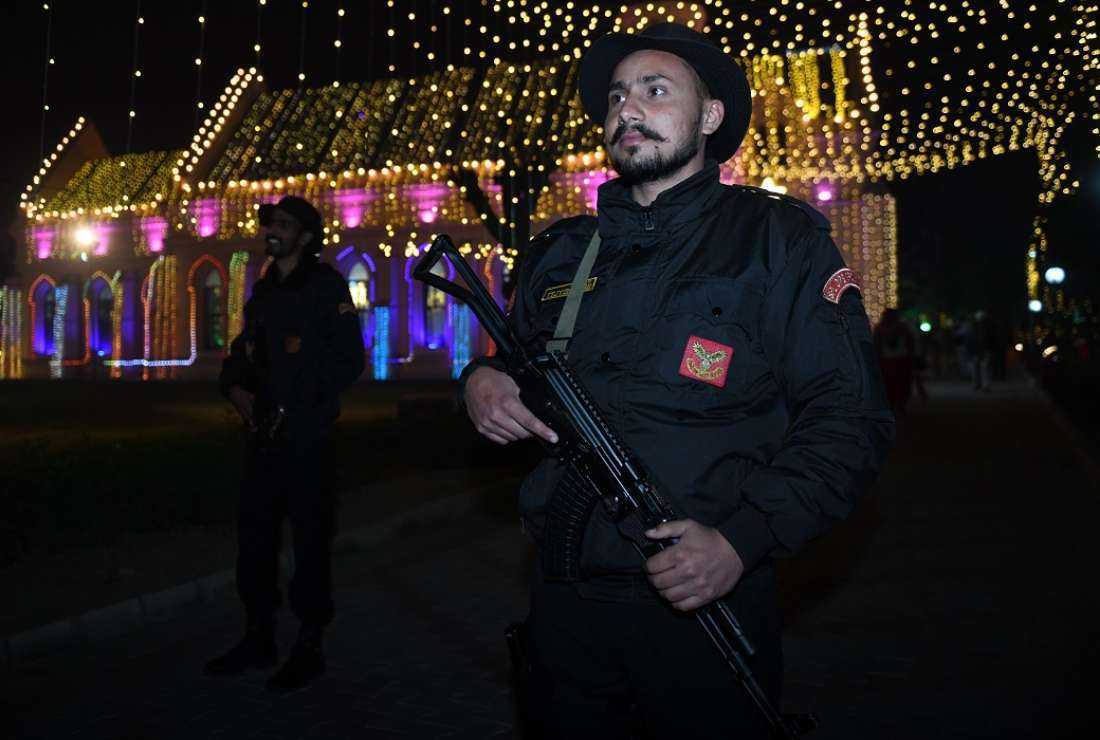 Police commandos stand guard outside the illuminated St Paul's church on the eve of Christmas in Amritsar on Dec. 24, 2021. Indian Christians in the southern Indian state of Karnataka have called for police protection to ensure a peaceful Christmas as Christians say they are reeling under attacks from Hindus since the enactment of an anti-conversion law. (Photo: AFP)

A Christian group in the southern Indian state of Karnataka has sought police protection for the minority community during the Christmas season.

The Akhila Bharatha Christha Mahasabha (All India Christian Forum), a Protestant body, in a written communication to the Director General and Inspector General of Police requested to ensure a peaceful Christmas as Christians are reeling under attacks  “since the enactment of the anti-conversion law.”

Prajwal Swamy S, founder member of the organization, said they wanted the police to provide security cover to churches across the southern state during the festive season.

“Christians are apprehensive of participating in carol singing and visiting the houses of church members during the night for good wishes as they may face attacks,” Swamy told The Hindu newspaper.

"Christians in Karnataka are fearful about being targeted"

The pro-Hindu Bharatiya Janata Party (BJP) government in Karnataka criminalized forced religious conversions through an ordinance on May 17.

However, Archbishop Peter Machado of Bangalore told UCA News on Dec. 6 that he is aware of a group seeking police protection but does not think it was needed.

“We have full faith in the city police as well as the people of Bangalore and I don’t see if it is (police protection) required,” he said.

Archbishop Machado though agreed that Christians in Karnataka are fearful about being targeted during the festive season.

“Yes, there is some kind of fear among the Christians after the state government passed the anti-conversion bill. But as far as Christmas celebration is concerned we hope that it will be peaceful in the state,” he said.

Father Faustine Lucas Lobo, a spokesperson of the Karnataka Catholic Bishops’ Council, told UCA News that the request for protection may be a precautionary measure in the wake of repeated attacks on minority communities in recent times.

“Carol singing groups will be moving around house-to-house and there is a possibility that some people may mistake this as part of conversion activities, thinking they might even visit houses of Hindus, hence the precaution,” the priest said.

A survey by the rights group, People’s Union for Civil Liberties (PUCL), reveals that Karnataka reported 39 incidents of hate crimes against the Christian community in 2021.

Ganesh Karnik, the BJP state spokesperson said the government does not support or promote violence and only wants to stop forced religious conversions in the state.

Christians make up 1.87 percent of Karnataka’s 68.4 million people, a majority of whom are Hindus.