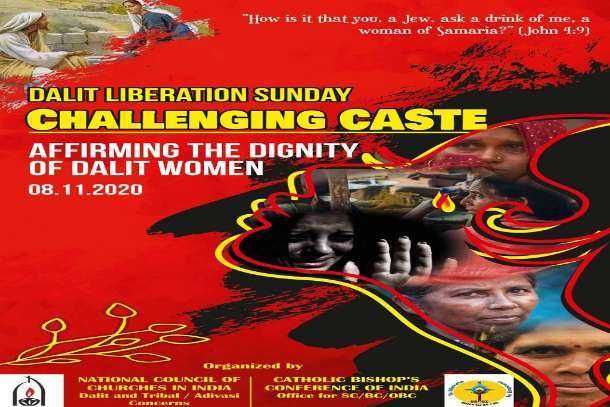 The theme of this year’s Dalit Liberation Sunday was ‘Challenging Caste: Affirming the Dignity of Dalit Women.’

The theme of this year’s event on Nov. 8 was "Challenging Caste: Affirming the Dignity of Dalit Women."

The Office for Scheduled Castes-Backward Classes of the Catholic Bishops’ Conference of India and the National Council of Churches in India (NCCI), which comprises Protestant and Orthodox churches, urged the Christian community to remember the Dalit faithful, especially Dalit women who are worst affected.

“This land, where female deities are worshiped as power, knowledge and wealth, has become the most unsafe place for women. Facts show that Dalit women suffer the horrors more than Dalit men,” Bishop Sarat Chandra Nayak, chairman of the Indian bishops' Office for People of Socially Poor Castes and Tribes, said in his message.

“In recent months, many Dalit women have been targeted, attacked and brutally killed. We bewail the fact that justice often eludes the Dalit survivors, while the perpetrators, backed by their political patrons, manipulate the law and move around scot-free.

“Violence against Dalits is often based on caste prejudice. The perpetrators consider Dalit women as mere objects to be used and thrown away. At the core, unless such a discriminatory and dehumanizing mentality changes, there won't be a reduction in the crimes against the marginalized. That’s possible only when every family consciously and practically promotes at home the equal dignity and right of every child.

“Lamentably, the intellectual luminaries, human rights activists, civil society members and the unprejudiced media are strategically silenced, while others become the mouthpiece of the power of the day and slaves of the privileged class.”

He added that Dalit Liberation Sunday is an occasion for the whole Christian community to renew its responsibility toward sisters and brothers of Dalit origin, especially Christians.

But even though the privileges were restored to Sikhs (1956) and to Buddhists (1990), Christians and Muslims, who have been pressing successive governments for several years, have not been granted them and there seems to be little hope for them.

The NCCI has for decades announced zero tolerance for caste discrimination in any form.

“No one can serve Christ and caste — the practice of caste is a sin and untouchability a crime. Practice of caste in its many manifestations despite it being rendered illegal is a blot on Indian social life and polity. Unfortunately social institutions including churches and political parties practice caste either tacitly or sometimes even openly,” the NCCI said in a Nov. 8 press release.