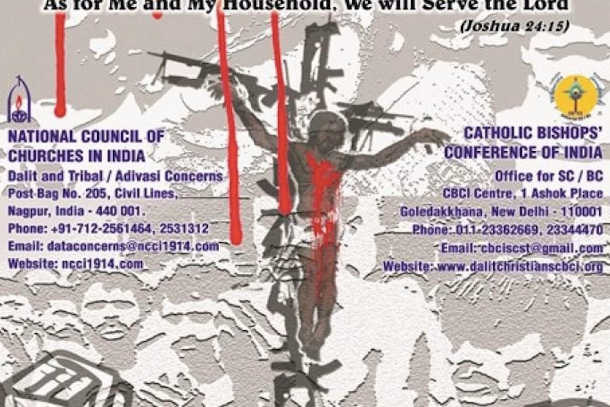 A poster prepared for the observance of Dalit Liberation Sunday on Nov. 11. Since 2007, India's Protestants and Catholics have dedicated the second Sunday of November to stress the equality of Christians of lower-caste origins. (Photo supplied)

India's Catholics and Protestants jointly observed Nov. 11 as Dalit Liberation Sunday with liturgy and activities urging an end to discrimination suffered by people of lower-caste origins within the church and society.

The observation is a "call to the whole Christian community to renew our faith, to awaken our consciousness to be the voice of the voiceless and to stand with vulnerable Dalits in society," he said in his message.

Since 2007, the National Council of Churches in India (NCCI) — a forum of Protestant and Orthodox churches — and the Catholic Bishops' Conference of India have observed the second Sunday of November as the day to celebrate Christians from Dalit groups.

Hundreds of Dalit people joined Christianity to escape the rigid caste system and they are estimated to number some 30 percent of India's 27 million Christians. Together with tribal people, who also form about 30 percent, these socially and economically poor groups constitute the majority of Indian Christians.

Dalit Liberation Sunday aims to bring people's attention to discrimination against Christian Dalit people, both within the church and society, Bishop Nayak said.

Dalit leaders say their people are not included in most church decision-making bodies and face discrimination by being given separate parishes, feasts and localities, including exclusive spaces for them in churches and even some cemeteries.

Dalit people often face violence. Bishop Nayak said the anti-Christian violence in Kandhamal in 2008 was an expression of social intolerance against the empowerment of Dalits.

"They were very poor Dalits and tribals who were simply massacred. We cannot forget their witness of faith," the bishop said.

The ecumenical observance had as its theme, "As for Me and My Household, We will serve the Lord," taken from the Book of Joshua. It was also the theme of the 10th anniversary observance of anti-Christian violence in Kandhamal.

In New Delhi, Bishop Theodore Mascarenhas, secretary-general of the bishops' conference, joined several prelates for a liturgy remembering the Dalit people through its readings, homily and prayers.

Two visiting African priests from the Nyeri Archdiocese in Kenya were among the concelebrants.

Father Z. Devasagayaraj, secretary of the bishops' office for Dalit and tribal people, told ucanews.com that discrimination against Dalit people is an issue for the whole Catholic Church and all churches in India.

He said parishes across India adapted the Sunday liturgy with a focus on Dalit rights and the discrimination they face in India.

Bishop Mascarenhas said the day is "important for us because at least once in a year we think of the Dalits in a more focused way. The one remembrance should last throughout the year."

Pradip Bansrior, executive secretary of the NCCI office for Dalits and tribal people, told ucanews.com that "the concerns of Dalit people are an issue challenging the core of our faith and Gospel."