Opposition Congress president Rahul Gandhi speaks at a protest rally called by India's most marginalized Dalit community over an amendment to a law that protects the rights of the group, in New Delhi on Aug. 9, 2018. (Photo: Sajjad Hussain/AFP)

Christian leaders have joined the chorus of those calling on India’s Supreme Court to review a judgment which they fear will adversely affect the opportunities of socially poor people working in government services.

India’s top court in its judgment on Feb. 7 said Indian states are not “bound” to reserve government jobs for people of low caste and tribes, and those thus appointed have “no fundamental right to claim quota in promotions.”

“The order is a big blow to the empowerment of the country’s Dalit and tribal population that makes up some 27 percent” of India’s 1. 3 billion people, said Father Vijay Kumar Nayak, secretary of the Indian bishops’ office for tribal and low-caste people.The court was dealing with pleas against Uttarakhand state government’s Sept. 5, 2012 decision to fill up all jobs without providing any reservations for low-caste and tribal people, also known as scheduled castes and scheduled tribes (SC/ST).India's constitution in its first schedule listed several tribes and castes as economically and socially poor people who need states' assistance to join the social mainstream. The constitution also suggested a quota in jobs and educational institutions as a means for such assistance.

Get it Now
However, the Supreme Court said that “it is settled law that the state government cannot be directed to provide reservations for appointment in public posts. Similarly, the state is not bound to make a reservation for scheduled castes and scheduled tribes in matters of promotions.”Father Nayak said that since the order comes from the Supreme Court, it will have “a pan-India effect."Father Nayak, who has a Dalit background, told UCA News on Feb. 10 that “it is a fact that SC and ST people continue to live in poverty.” The judgment will embolden at least some states to deny quota in jobs and promotions to this disadvantaged group, he said.

In order to counter the judgment, Father Nayak wanted the federal government led by the pro-Hindu Bharatiya Janata Party (BJP) to file a review petition in the same court. 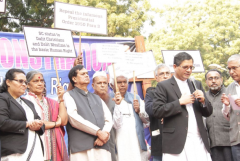 Opposition Congress party leader Mallikarjun Kharge on Feb. 9 also urged Prime Minister Narendra Modi’s government to either file a review petition in the Supreme Court or amend the constitution to make reservation a fundamental right of weaker sections of society.

“At least now the government of India should wake up,” Kharge said.

Congress leaders accused the BJP government of trying to “abolish” the constitution in order to push the country towards establishing its ideology of Hindu nationalism of upper-caste hegemony.

“I know their agenda. They want to finish the constitution, finish the reservation in promotions, so they are going step by step,” Kharge said.

Prominent tribal leader Gulzar Singh Markam said the BJP was “trying to destabilize the constitution and abolish constitutional guarantees such as reservation with the help of the court.”

“The government could have presented its side in the court to avoid such a verdict that will have serious repercussions for the well-being of vulnerable sections in the country,” Markam told UCA News.

“The government wants to push its Hindu agenda blocking the empowerment of Dalits and tribal people, who are at the bottom of Indian society.”

Prabhakar Tirkey, who heads ecumenical Christian body Rashtriya Isai Mahasangh, said the order is “a direct infringement upon the constitutional rights of a weaker section and their empowerment.”

Tirkey, himself a tribal, said it is now clear that if “a Dalit or tribal gets a job on special quota, he or she will retire in the same post. It will become another form of discrimination,” he said.

Supreme Court lawyer M.P. Raju said the court was only reiterating a principle already established in earlier judgments that job quota is not a fundamental right of SC/ST people. It is also an established ruling that the court cannot direct states to allocate quota to SC/ST people, he said.

“The quota tussle has been going on for so long. It began in 1951 and several judgments of High Courts and the Supreme Court are before us. All of them directly or indirectly tell us that SC/ST people have no fundamental right to claim quota,” Raju told UCA News.