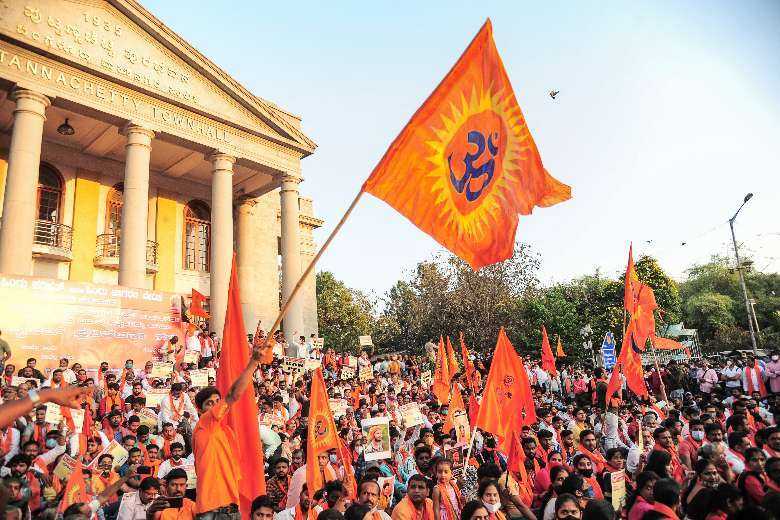 Hindu protesters at a demonstration to protest the alleged killing of a member of the Bajrang Dal at Bengaluru in southern India's Karnataka state on Feb. 23. (Photo: AFP)

Church leaders have joined political parties and the Muslim community to condemn a call by Hindu groups to boycott halal meat during the traditional New Year celebrations in the southern Indian state of Karnataka.

The state celebrated the Ugadi festival followed by Hosa tadukua, which is supposed to be a day of non-vegetarian feasting, on April 2-3.

The call to boycott halal meat came close on the heels of Karnataka High Court’s ban on wearing the hijab in educational institutions and a ban on Muslim traders at Hindu temple premises and fairs.

Hindu groups actively campaigned last week to pursue majority Hindus to stop buying halal meat, saying that “as per Islam, halal meat is first offered to Allah, and the same cannot be offered to Hindu gods."

Local media reported that Hindu activists assaulted a chicken shop owner and attacked a hotelier, leading to a few arrests, but their call went largely unheeded by the state's Hindus.

Father Faustine Lucas Lobo, spokesperson of the Karnataka Catholic Bishops’ Council, said the pro-Hindu Bharatiya Janata Party (BJP) government in the state had done nothing to address unemployment or arrest rising fuel prices and inflation and so wanted to polarize the electorate on religious lines.

“Why only target a particular group considered as second-class citizens by the ruling governments in New Delhi and Karnataka?”

“The state is going to have its assembly elections next year, so the government is trying to convince Hindu voters that it is the savior of their religion and culture,” he told UCA News. “It is a well-planned tactic to corner minorities who they think do not vote for a Hindu party.”

He said that “it all started with the hijab controversy and now halal meat, then there were other issues like love jihad. It is all game plan for the forthcoming election, which it does not want to lose”.

Muhammad Arif, chairman of the Centre for Harmony and Peace, said it was unfortunate that the hijab and halal meat were being made issues when the state cannot dictate what people should wear or eat.

“Why only target a particular group considered as second-class citizens by the ruling governments in New Delhi and Karnataka?” he asked.

“Karnataka state has now become a laboratory for the BJP government to conduct its experiments against so-called love jihad, the hijab and halal,” the Muslim leader said.

“Halal is not relevant to the common people but it will end up affecting relationships between communities. That will disturb the peace in society”

Meanwhile, police in the state’s Shivamogga district arrested seven people belonging to the Hindu Janajagruthi Samithi for threatening the owner of a meat shop to stop selling halal meat on April 1. The same group also went inside a hotel and insisted that they be served non-halal meat.

Opposition Congress leader Siddaramaiah said a non-issue was being blown out of proportion to sow the seeds of division in society by right-wing groups.

“Halal is not relevant to the common people but it will end up affecting relationships between communities. That will disturb the peace in society,” he said.

H.D. Kumaraswamy of the Janata Dal (Secular) said “people in the state will not tolerate attempts to disturb the peace in the garb of religion.”

He said Karnataka belonged to all people and was not the property of right-wing organizations.