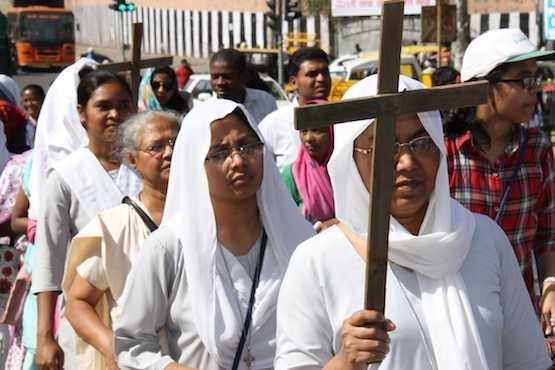 Catholics in Delhi Archdiocese pray during a rally on Palm Sunday April 9.  Two Christian women have been arrested in Madhya Pradesh state on charges of conversion, which Christian leaders see as part of an ongoing agenda to intimidate and harass Christians. (ucanews.com photo)

Police have arrested two Christian women in central India on charges of kidnapping children for conversion, which church leaders say is the latest example of Christians being harassed.

However, there have been admissions that in some such cases sloppy record keeping played into the hands of church opponents.

Anita Joseph and Amrit Kumar appeared Oct. 25 before the Indore district magistrate in Madhya Pradesh state a day after their arrest and were ordered to remain in judicial custody while police investigate further.

Indore police official Kunwarlal Warkade said the women were arrested after a group called Dharma Jagran Manch (Vigilant Group for Hindu Religion) complained that the children were being taken to Mumbai by train for conversion to Christianity.

Warkade told ucanews.com that the charges include kidnapping of minors and violating a state law restricting religious conversion activities.

The women could be jailed for seven years or more if convicted of the offenses, which Warkade said involved four girls and six boys aged below 14.

Families allege the women lured the children with promises of toys and overseas schooling, Warkade added.

The pro-Hindu Bharatiya Janata Party (BJP) has governed Madhya Pradesh state for the past 14 years.

Bishop Chacko Thottumarickal of Indore said the arrests constitute an attempt by hard-liners to intimidate missionaries.

“We are always on their radar and it is quite scary,” he told ucanews.com.

The state has experienced three other such incidents so far this year.

In one episode four months ago, police arrested and temporarily detained a Catholic nun and four tribal girls travelling with her by train on conversion charges.

Bishop Thottumarickal said Church people are aware of the dangers.

He has asked priests, nuns and lay people engaged in social work to keep all their documentation up to date and to be transparent in their activities.

“We have to be extra cautious in managing our homes for children, women and aged people as even a minor mistake can cause big problems for us,” the Divine Word prelate added.

Church leaders such as Bishop Thottumarickal say groups opposed to the church can misrepresent Christian social work as involving allurement or fraud for the purpose of winning converts.

The law makes it mandatory for a person to obtain permission from state government officials before converting to another religion.

Presentation Sister Anastasia Gill, a member of the Delhi Minority Commission, told ucanews.com that the latest arrest was a “conspiracy” by Hindu groups to portray Christians as indulging in illicit conversions.

“But everyone knows that it is not the case,” she said.

Extremist groups made false claims in order to represent themselves as protecting Hinduism, explained Sister Gill, who is a qualified lawyer in New Delhi.

However, the nun noted that in some cases there was a lack of responsibility by Christians who failed to keep adequate records needed to foil malicious complaints.

Christian leaders such as Shibu Thomas, founder of the ecumenical forum Persecution Relief, complain that   attacks on Christian have become rampant under the BJP state administration.

Christian leaders have reported more than 80 cases of violence so far this year, including the murder of pastors as well as rapes of women and attacks on Christian places of worship.

Christians are politically insignificant in Madhya Pradesh state, as they make up only 0.3 percent of its 73 million population with the vast majority being Hindus.