A man wears a face mask amid fears of the spread of Covid-19 in McLeod Ganj in Himachal Pradesh, India. (Photo: AFP)

Christians in India have adopted new measures, such as avoiding the customary kissing of the crucifix after the Way of the Cross and receiving Holy Communion in the mouth, to prevent the spread of the deadly coronavirus.

The move came after 47 people tested positive for Covid-19 in 12 states including two federal-ruled states.

Kerala in the south and Uttar Pradesh in the north are the worst affected, with both states each reporting nine positive cases.

Kerala, with nearly two million of its citizens living abroad, was the first to report a case of the disease on Jan. 30. The patient was a student studying in China and had returned home followed by two others.

They were treated and discharged. However, six fresh cases have now been reported from the state, with the latest a three-year-old child in Kerala’s Ernakulam district on March 9.

Another northern state, Haryana, has reported 14 positive cases, all foreigners mostly from Italy who were visiting India.

Cardinal George Alencherry, head of the Eastern-rite Syro-Malabar Church and president of the Kerala Catholic Bishops’ Council, urged people to follow government instructions to contain the spread of the disease.

In a circular released to the media on March 9, the cardinal appealed to people to exercise maximum caution in their dealings so that “we can contain its spread” to other people.

The prelate also cautioned people to be vigilant against those who spread fake news and fear about the disease through social media and other public platforms.

He has also advised people to regulate their trips and behavior in such a manner that the disease is not spread to anyone. 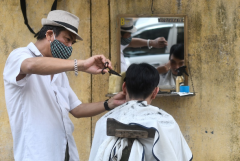 The cardinal also endorsed the circular issued by Cardinal Oswald Gracias, archbishop of Bombay and president of the Catholic Bishops’ Conference of India, on March 3.

Cardinal Gracias called on people to avoid shaking hands during the sign of peace during Mass, urging them to greet each other with folded hands. He also advised priests and others to distribute Holy Communion in the hands instead of in the mouth.

During Lent, the cardinal appealed for people to avoid kissing the crucifix during the veneration of the cross, saying they should bow and pay their obeisance instead.

Priests and others have been advised to sanitize their hands before and after distribution of the Holy Communion and keep holy water stoops empty.

“We are following these measures for the safety of everyone,” Father Antony Thalachelloor, spokesman for the Syro-Malabar Synod, told UCA News.

“As we see a rise in the number of cases, we are discussing coming out with more measures to be implemented locally to protect our people.

“Since we took precautions when the first case was reported, it did not spread and we need to maintain the same spirit and we can avoid its spread.”

The five fresh cases in Kerala came from Pathanamthitta district from a three-member family who returned from Italy but did not report to authorities and then spread the virus to two others.

The state has 1,116 individuals under observation, 976 of them under home quarantine while 149 are in hospitals, she said. This includes people with symptoms.

The administration has advised against more than two people gathering in public places as part of its measures to check the virus spreading.

“Shops and other establishments are deserted. Many shops in the area are also closed,” said a bus driver from Pathanamthitta.