A Christian group in India's Kerala state has called for promoting non-halal meat among community members rather than the halal meat popular among the Muslim community.

The Christian League is planning to create awareness among Christians about the meat they consume and wants shops to specify what sort of meat they are selling to ensure that Christians get non-halal meat."Christians should know what meat are they eating," said Murphy Thomas, chairman of the inter-denominational league, which claims to address issues concerning the Christian community in the southern state.
Donate to UCA News with a small contribution of your choice
"We know many Christians eat halal meat, which has religious importance to Muslims, and therefore we want Christians to avoid it and be aware of shops that sell non-halal meat," Thomas told UCA News on Jan. 13.The Arabic word "halal" means "permissible or lawful." Islam teaches its followers to consume meant processed following permissible methods, including prescribed forms of slaughter.Islam insists that the meat its adherents consume should be from animals or poultry killed by cutting of the jugular vein, carotid, artery or windpipe accompanied by certain prayers.The Christian League also expects support from Hindus in avoiding halal meat in Kerala as, unlike their northern Indian counterparts, most Hindus in the southern state eat meat.Currently, most meat shops do not announce if they are selling halal or non-halal meat, and non-Muslims purchase meat from their nearest shops without seeking to know the difference.Thomas said Christians and Hindus should be made aware of the kind of meat they consume. They have a right to reject meat processed with Islamic prescriptions, he asserted. "The league, however, does not plan to open any special shop. Instead, we will assist shops and slaughterhouses to specify the meat they sell," Thomas added.
Related News 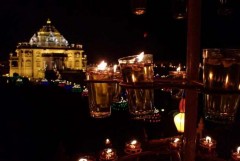 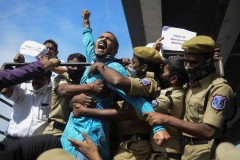 Thank you. You are now signed up to Daily newsletter
Christians form some 18 percent of the 33 million people in Kerala. Hindus, the largest group, comprise 55 percent, while Muslims number 26 percent.Muslims operate most meat shops in Kerala and throughout India. The move against halal has been going on in India for some time.In the last week of December, South Delhi Municipal Corporation in India's capital issued a similar call to display halal or non-halal meat in all hotels, restaurants and meat outlets.The standing committee of the civic body led by the pro-Hindu Bharatiya Janata Party has also passed a resolution saying halal meat is forbidden for Hindus and Sikhs.Committee chairperson Rajdutt Gahlot said that "the target is to let the buyer know what sort of meat is being served so that they can make an informed decision." The move, however, is opposed by restaurant owners who fear it could adversely affect their business. It is a move to communalize food, their body said.Meanwhile, a government agency that exports meat — the Agricultural and Processed Food Products Export Development Authority — on Jan. 4 reportedly removed the word "halal" from a red meat manual.The revised manual said: "The animals are slaughtered to the requirement of the importing country/importer." It previously stated: "The animals are slaughtered strictly according to the halal method to meet the requirement of Islamic countries."